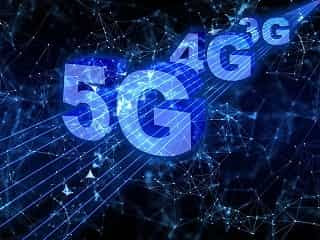 Telecoms engineers have told Radio 1 Newsbeat they're being threatened and harassed by people who believe they're working on 5G, which has been wrongly linked to coronavirus.
Claims about any link have been branded complete rubbish by scientists.
But the union and trade body representing thousands of workers across the UK say they've had around 120 cases of abuse reported to them.
The reports have included threats of extreme violence.
"We've actually had cases where people have been threatened with being stabbed, threatened with physical violence and in some cases actually threatened with murder," says Andy Kerr, deputy general secretary of the Communication Workers Union (CWU).
CWU represents nearly 40,000 telecoms engineers.
Andy says most aren't even working on 5G - they're maintaining the network and playing "a crucial role".
"People are stuck at home - whether they want to watch their box set of Peaky Blinders or somebody's isolated and they want to keep in touch with family.
"The only way to do that is the telecom network. More importantly these are engineers maintaining the network so it's there for all the health and emergency services."
The National Crime Agency has confirmed there has been a series of recent arson attacks and cases of criminal damage to telecommunication masts.
Newsbeat's spoken to three engineers who asked for only their first names to be used because they're scared for their safety.

Mike's been an engineer for nine years.
"Incidents range from people shouting abuse, videoing, asking us why we're putting up death towers, why we're going to fry everyone.
"We've had objects thrown at engineers. Threats saying they'll come back with groups of lads and stab them. We've had people threaten to shoot us if we don't leave.
He admits they have to be "more vigilant" whilst doing the job since the abuse and harassment of engineers started.
"There's a lot of uncertainty, We need to keep a bit more of a watchful eye on what's going on and who's about."

"Everyone I've spoken to says they're having issues.
"Me and my team have had people shouting: 'You're killing everyone, stop putting in the 5G.' Mainly making us feel uncomfortable. Asking us how we are key workers and why we are doing what we're doing.
"There is that worry every day when you get in the van that something could happen - but you just have to get on with it and keep everyone safe in the meantime."
West Midlands Police says the crimes are "being taken extremely seriously due to the risk to the public that they pose".

Sam lives with his wife and two daughters and is currently installing temporary sites across the UK for the Nightingale hospitals.
"A member of the public decided to key my truck because he thought I was working on 5G.
"I've made small changes to the way I work. We remove our signage from our vehicles and we're in non-branded company uniform.
"I know of other engineers on sites that have been vandalised - and they've set fire to masts and the cabins have been smashed up.
"My family is concerned. My wife's at home, she nags me day in day out when I leave the house, to keep in contact and make sure I'm ok.
"I love my job and we're helping to keep everyone including the emergency services connected at this crucial time, so I couldn't feel more valued as an engineer."
It's worth saying once again scientists insist there's no link between the high-speed network and Covid-19.
Olga Robinson is the BBC's specialist in coronavirus and 5G conspiracy theories.
"Scientists say 5G and the coronavirus are completely different things - as different as chalk and cheese - so you can't get the virus by using 5G.
"They also say 5G can't impact your immune system and make you more susceptible because the radio waves being used aren't strong enough to damage your cells, body or immune system."

Why do people believe it if it isn't true?

"I think what makes these conspiracy theories more believable is that we still don't know a lot about the coronavirus," says Olga.
She says the theories also rely on "so-called experts and use scientific terms so it looks very sophisticated".
And Olga has a few easy tips on how to check what you're reading is true.
"First of all stop and think, don't immediately share," says Olga.
"Then check the source of that claim. Who is that person, who is that group that you've seen making the claim?"
In other words, don't believe that message in your WhatsApp group from a friend of a friend claiming to have been sent an email by someone who got an email from a doctor.
"Read the claims carefully and investigate every single one of them because there are so many half-truths doing the rounds on social media.
"And if you're still unsure after all your googling and checks, just don't share - it's a simple as that."