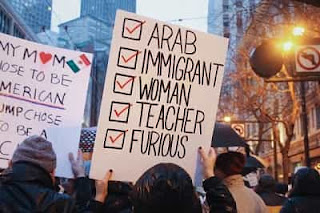 President Donald Trump on Wednesday signed a presidential proclamation suspending the admission of new permanent residents into the United States for the next two months, citing the potential for "a potentially protracted economic recovery with persistently high unemployment if labor supply outpaces labor demand."


Trump told reporters that he'd signed the order during the White House Coronavirus Task Force's daily press briefing. He said that he signed the document just prior to entering the White House briefing room.
"In order to protect our great American workers, I've just signed an executive order temporarily suspending immigration into the United States. This will ensure that unemployed Americans of all backgrounds will be first in line for jobs as our economy reopens," Trump said.
Although the president described the measure as one that suspends immigration into the U.S., in actuality the order he approved only prevents non-citizens living outside the country from obtaining a "Green Card" if they do not have a valid immigrant visa or other travel document that grants entry to the United States.
Additionally, non-citizens who are doctors, nurses, or other health care professionals are exempt from the suspension so long as they are seeking to enter the U.S. "to perform medical research or other research intended to combat the spread of COVID-19; or to perform work essential to combating, recovering from, or otherwise alleviating the effects of the COVID-19 outbreak." Spouses and children of such individuals are exempt as well.
Moreover, the proclamation also exempts the spouses and children of American citizens, any member of the U.S. Armed Forces, their spouses and children, Iraqi or Afghan citizens employed by U.S. forces, children who are being adopted from abroad by U.S. citizens, and any non-citizens who can invest $1.8 million into an American business.
The administration's Green Card moratorium arose from Trump's late-night tweet Monday. "In light of the attack from the Invisible Enemy, as well as the need to protect the jobs of our GREAT American Citizens, I will be signing an Executive Order to temporarily suspend immigration into the United States!" he wrote, referring to the novel coronavirus pandemic.
Although some of Trump's more hawkish advisers—such as Senior Policy Adviser Stephen Miller—have long favored putting a stop to all immigration to the United States, the president's staff was caught off-guard after Trump tweeted he would do just that, according to two White House officials who were not authorized to speak publicly.
One such White House aide told Newsweek: "I have no earthly idea what he's talking about" when asked about the order late Monday.
Administration officials began to walk back their boss' words Tuesday morning, after White House Counsel's Office attorneys began working on crafting the order, and as feedback rolled into White House officials on the effect a sweeping immigration ban would have on key sectors of the economy, the scope of the order grew more narrow. A senior White House official close to the process told Newsweek that work on drafting the order had continued through Tuesday night and well into Wednesday, with a final version gaining approval from White House Counsel Pat Cipollone and the Justice Department's Office of Legal Counsel shortly before Trump signed it.
One early version of the measure would have temporarily halted the use of non-immigrant visas such as the H-1B visa, which grants highly-educated workers entry to work for U.S.-based employers. While administration sources with knowledge of the drafting process told Newsweek that that version of the order had been envisioned with exceptions for agricultural and medical workers who have been deemed essential to fighting the Covid-19 pandemic. However, White House officials scrapped that iteration because of fierce opposition from groups representing broad swaths of the U.S. economy—including the technology, manufacturing, pharmaceutical, and biotechnology sectors—which employ non-Americans in key positions.
One CEO opposed to the order, online remittance service Remitly co-founder Matt Oppenheimer, said in a statement that the decision to suspend immigration to the U.S. was not only wrong, but "baseless and counterproductive."
"Immigrants have a profound impact on this country, and are the backbone of many essential services, including farming, healthcare, and food delivery services," he said.
By the time Trump announced the measure at Tuesday evening's White House Coronavirus Task Force daily briefing, the order had changed again. He told reporters he would be signing a two-month moratorium on the issuance of "Green Cards," which confer permanent resident status upon non-citizens.
While non-immigrant visas such as the H-1B are conditioned on employment with a particular company and expire after a set period of time, a "Green Card" allows a non-citizen to remain in the United States indefinitely, and to work for any employer.
Recent polls showed that temporarily restricting immigration during the pandemic draws support from both sides of the political aisle. A recent USA Today-Ipsos poll, for example, found that a majority of Americans—79 percent—said the U.S. government should temporarily stop immigration to help contain the virus' spread.
But as for Trump and his administration's response to the Covid-19 pandemic, recent polling also shows that large swaths of the electorate are displeased with both.
According to a YouGov poll commissioned by The Economist, 51 percent of respondents surveyed between April 19 and April 21 said they disapprove of Trump's job performance as president. The same poll shows former Vice President Joe Biden holding a six-point lead over Trump, with 48 percent of respondents saying they preferring Biden to Trump's 42 percent.
A separate poll conducted over the same time period by Rasmussen Reports, a pollster whose results are generally more favorable to the president, showed his approval rating even deeper underwater by an 11-point margin, with 55 percent of respondents disapproving of Trump and just 44 percent approving of his performance.
The conventional wisdom among Trumpworld veterans is that focusing on "suspension of all immigration" into the U.S., the president can galvanize his own base while forcing Democrats to make politically damaging statements that can later be weaponized in GOP attack ads.
Officials with the president's reelection campaign also promoted his latest order before the details of what it included had been confirmed by the White House.