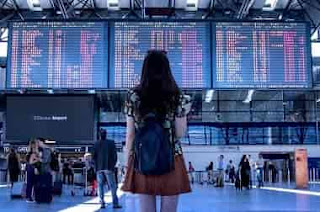 European airlines are refusing to provide refunds to customers whose flights were cancelled due to coronavirus in contravention of European Union regulations.

EU rules require that travellers get a refund within seven days, but the majority of carriers are withholding reimbursements and offering travel vouchers or a free rebooking instead.
It comes despite massive bailouts to airlines by national governments.
Air France was handed a €7 billion loan but customers are being told they will have to wait a year before they can get their money back.
An Air France spokesperson told Euronews: “Given the lack of visibility regarding the date on which an even moderate recovery in operations may occur, Air France is currently maintaining its policy of deferred refunds of airline tickets cancelled as a result of the Covid-19 crisis.”
It is the same at KLM, who are in a partnership with Air France. The Dutch government has offered a bailout worth up to €4 billion.
Easyjet, which secured a €686 million bailout from the UK government, insists customers can get a refund by calling their support line but passengers have complained about long waiting times.
A representative said: “Customers on cancelled flights can transfer to an alternative flight free of charge or receive a voucher for the value of their booking online or claim a refund through our contact centre.”

In March, the EU published guidelines reiterating that customers are entitled to refunds.
“If the carrier proposes a voucher, this offer cannot affect the passenger’s right to opt for reimbursement instead,” it stated.
The bloc’s transport chief Adina Vălean hinted that the EU could step in: “We continue to monitor the rapidly evolving situation, and, if need be, further steps will be taken.”

Airlines have been severely affected by the COVID-19 crisis. The pan-European air traffic control network Eurogroup says there are 87% fewer flights than this time last year and that one million flights have been cancelled since the start of the crisis
The International Air Transport Association, which represents the interests of airlines, estimates customers are owed €32.3 billion.
Yet, in a blog on IATA’s website the organisation’s, CEO Alexandre de Juniac said carriers cannot afford to pay the huge sum back: “I am supporting airlines (and our partners in the travel and tourism sector) in their request for governments to delay the requirement for immediate refunds.”
However, consumer groups say that customers need their money back now.

Passengers have already paid the price — they shouldn't have to foot the bill.

The Government must step in to ensure travel companies #RefundPassengers for cancelled trips.

One way for grounded travellers to recuperate the cost of a cancelled trip is through a chargeback on their credit cards. The European Consumer Centre France says customers can get their credit card company to issue a refund if a company doesn’t deliver the service you paid for.
“First try to find a solution with the trader directly, if possible in writing. If the trader does not react, refuses to reimburse you or to proceed with the delivery, or if the trader goes bankrupt, send a dispute to the credit card issuer and/or your bank. If your credit card issuer or bank refuses to reimburse you, contact their bank mediator.”