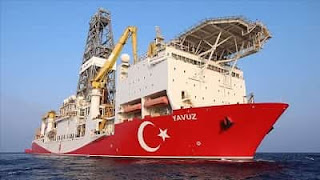 UN Security Council permanent members China and France, as well as Italy, voiced support for Cyprus on Wednesday, as Turkey has once more dispatched a drillship to explore for natural gas inside the island’s exclusive economic zone (EEZ).


France said it was following the situation in the Eastern Mediterranean closely, reiterating that its position, made clear on several occasions, is that Turkish drillings in Cyprus’ EEZ constitute a violation of the sovereignty of the Republic of Cyprus and of international law.
“We are following closely the situation in the Eastern Mediterranean, in particular after the recent arrival of Turkish drillship Yavuz in the Cypriot EEZ,” the French embassy said in a statement to the Cyprus News Agency.
“As France made clear on several occasions, these drillings constitute a violation of the sovereignty of the Republic of Cyprus and of international law.”
The embassy said restraint should prevail more than ever as everyone needed to focus their energy on fighting the Covid-19 pandemic.
Yavuz intends to drill in an area that covers part of exploration blocks 6 and 7, which have been licensed to the ENI and Total consortium.
An Italian source told CNA that it was monitoring developments carefully but with concern.
It said Rome was in close contact with ENI since the Turkish drillship planned on venturing in areas that overlapped concessions 6 and 7.
The EU foreign ministers, who met on Wednesday by teleconference, also expressed concern over Turkey`s activity in the Eastern Mediterranean and reiterated their full solidarity with Cyprus, according to the EU High Representative for Foreign Affairs and Security Policy Josep Borrell.
He said, however, that the issue was unlikely to be discussed at the EU leaders summit on Thursday.
Chinese ambassador Huang Xingyuan said his country understood and supported the efforts Cyprus was making to safeguard its territorial integrity.
“In light if the ongoing pandemic, we hope not to see actions that obstruct or distract attention from joint efforts to fight Covid-19,” he said.
He called on all parties to show self-restraint and cease all actions that could escalate the situation further.