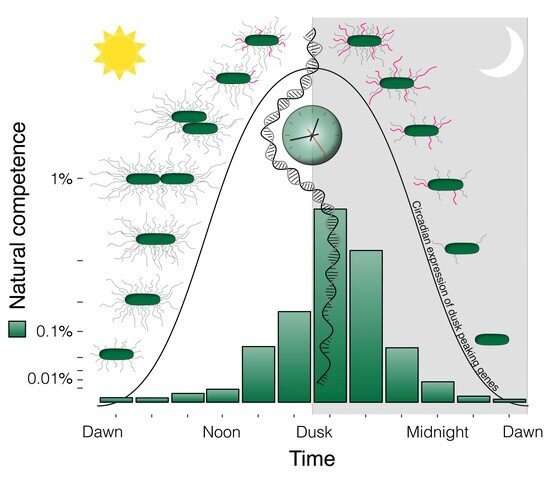 New research provides a striking example of the importance of keeping the internal biological clock aligned with the external environment so that processes occur at the right time of day. Credit: Golden Lab, UC San Diego


Timing is everything. A fresh example supporting the old saying has been found in connection with the systems regulated by biological clocks.


Research on circadian rhythms, our internal 24-hour patterns that affect sleep-wake and metabolic cycles, has shown that timing is key for human health. When our activities and internal circadian clocks are out of step with the natural day-night cycle—for example, in cases of irregular shift work, jet lag and poor sleep-wake habits—we increase our risk of disease because of the mistiming of important biological processes. But the genetics behind these mechanisms haven't been well established.
Now scientists at the University of California San Diego studying photosynthetic bacteria called cyanobacteria, or "blue-green algae," have identified the roots of a behavior that is regulated by the circadian clock.
The findings, led by Division of Biological Sciences Associate Project Scientist Arnaud Taton and senior authors James and Susan Golden, are published in Nature Communications.
"I think this paper demonstrates the importance of having internal biological time coincide with environmental time," said UC San Diego Distinguished Professor Susan Golden, director of the Center for Circadian Biology and senior author of the paper. "There are lots of human illnesses in which people are poorly aligned to their environment. This can result from habits such as getting too much light at night, eating at odd times of the day and not sleeping regularly. In the cyanobacterium it makes a very big difference for biological time and external environment time to be aligned." 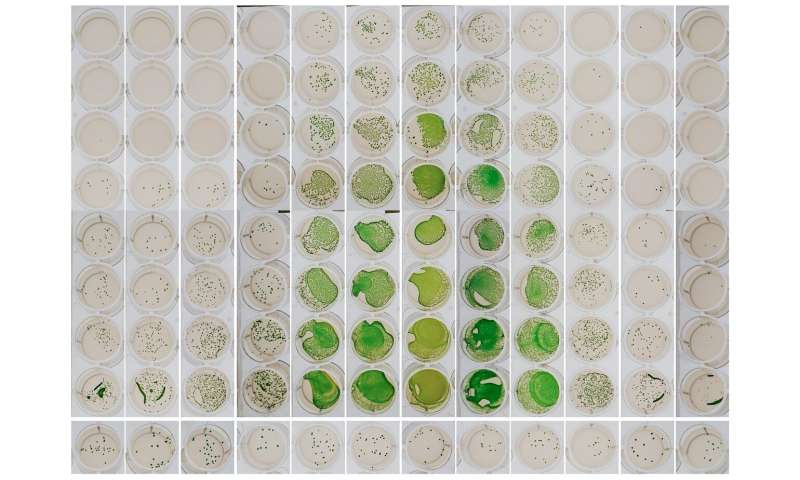 Columns show samples of cyanobacteria taken at different times of day and incubated with DNA that, if taken up and incorporated, allows them to grow on an antibiotic-containing medium. Green growth higher in the column shows more cells have taken up DNA. The samples in the center, around dusk and early night, are thousands of times better at taking up DNA than samples at dawn (left and right edges). Credit: Golden Lab, UC San Diego

Scientists know that in the hunt for new genes, bacteria incorporate DNA from the environment. Such processes ensure that there is raw material to generate genetic variation, which is how species evolve. Yet the details of this puzzling process is understood in only a few organisms. The ability to take up DNA is typically tightly regulated, suggesting to scientists that it would be detrimental to the organism to indiscriminately take up foreign genes.
In the new study, the researchers identified the DNA uptake machinery in the cyanobacterium Synechococcus elongatus and discovered that the internal circadian clocks within their cells prevent DNA uptake early in the day and enhance the process early at night. They had predicted that clock-mediated expression of certain dusk-peaking, dark-induced genes is central for taking up DNA from the environment. They found that when darkness occurs at the time the cells' internal clock tells them it's dusk, DNA uptake and incorporation increase dramatically. In contrast, darkness at times that do not match the internal clock time fails to provide a boost in DNA uptake and incorporation.
As for why early DNA uptake is discouraged and late is enhanced, scientists aren't quite sure. They are testing hypotheses such as whether it may be helpful to avoid taking up potentially dangerous DNA when viruses are more prevalent, which in some environments is during the day.
"This study provides a striking example of the importance of keeping the internal biological clock aligned with the external environment so that processes occur at the right time of day," the researchers say.
Source
Tags Physics, Science
Newer Post Older Post