Rio’s Christ the Redeemer statue lit up as a doctor, in tribute to healthcare workers fighting coronavirus

April 13, 2020
Net-News
Brazil's Christ the Redeemer statue was illuminated to look like a doctor on Easter Sunday, in a tribute to front-line healthcare workers battling the coronavirus pandemic around the world.


The flags of several countries affected by the outbreak were also projected onto the monument, which towers over Rio de Janeiro.
The city's archbishop, Dom Orani Tempesta, performed a mass at the base of the statue during the light show, in which he paid tribute to medical workers.
Messages of thanks in various language appeared on the statue, while pictures of medical professionals wearing scrubs and putting on face masks were also shown. The slogan "Fique Em Casa" -- meaning "Stay at Home" -- was projected onto the statue's arm.
This is the second time the monument has been illuminated in response to the pandemic. 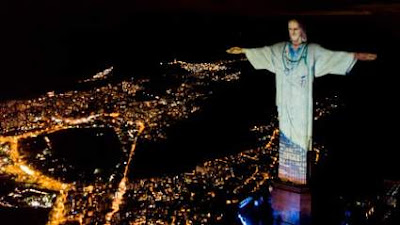 Last month, a composite of various countries' flags was displayed on the statue, recognizing nations that have reported cases of the virus.
Brazil has so far recorded more than 22,000 Covid-19 cases and 1,230 deaths, according to figures from Johns Hopkins University.
However, President Jair Bolsonaro remains one of the few world leaders playing down the threat of the disease.
The populist leader has continued to push back on social-distancing policies in recent weeks, dismissing the coronavirus as a “little flu” and saying Brazil will suffer more if the economy collapses.
Source