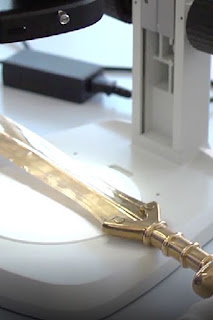 Bronze swords have been found by the thousands in graves, rivers, and bogs all across Europe. But because the alloy is so soft—and easy to mangle compared with later iron weapons—historians have long wondered whether these swords were battlefield tools or mere status symbols. Now, a team of archaeologists has staged modern fights with bronze swords to measure the resulting microscopic dings and dents. Sword-on-sword contact was a “big part” of Bronze Age fighting, they found, done with specific, artful moves that spread from region to region over time.


Unlike axes, spears, or arrows, “swords are the first objects invented purely to kill someone,” says University of Göttingen archaeologist Raphael Hermann, who led the new study. Bronze swords—used across Europe from 1600 B.C.E. to 600 C.E.—were made of a mixture of copper and tin, which was softer and harder to repair than later iron weapons. That meant Bronze Age weapons and fighting techniques had to be adapted to the metal’s properties. “Use them in a clumsy way, and you’ll destroy them,” says Barry Molloy, an archaeologist at University College Dublin who was not involved in the study.

As a result, some archaeologists suggested bronze blades served a largely ceremonial purpose. At most, they argued, fighters adapted their technique to the metal’s limitations: Perhaps Bronze Age warriors actively avoided crossing swords to spare their weapons. “Stab somebody in the guts, and you won’t have a mark on your sword at all,” Hermann says.

To test the idea, Hermann and colleagues had a weaponsmith cast seven bronze swords. Then, they systematically recorded the marks left by a series of preplanned blade-on-blade blows, as well as strikes on shields and spears. “But that’s not real combat,” Hermann says. “I thought, ‘There’s something missing.’”

While a graduate student at Newcastle University, he recruited members of a local club devoted to recreating and teaching medieval European combat styles, and asked them to duel with the replicas, using motions found in combat manuals written in the Middle Ages. After recording the combat sequences using high-speed cameras, the researchers noted the type and location of dents and notches left after each clash.

The team assigned characteristic wear patterns to specific sword moves and combinations. If the motions left the same distinctive marks found on Bronze Age swords, Hermann says, it was highly likely that Bronze Age warriors had also used those moves. For example, marks on the replica swords made by a technique known to medieval German duelists as versetzen, or “displacement”—locking blades in an effort to control and dominate an opponent’s weapon—were identical to distinct bulges found on swords from Bronze Age Italy and Great Britain.

Next, Hermann and colleagues put 110 Bronze Age swords from Italy and Great Britain under a microscope and cataloged more than 2500 wear marks. Wear patterns were linked to geography and time, suggesting distinct fighting styles developed over centuries, they report this month in the Journal of Archaeological Method and Theory. Displacement, for example, didn’t show up until 1300 B.C.E. and appeared in Italy several centuries before it did in Great Britain.
“In order to fight the way the marks show, there has to be a lot of training involved,” Hermann says. Because the marks are so consistent from sword to sword, they suggest different warriors weren’t swinging at random, but were using well-practiced techniques. Christian Horn, an archaeologist at the University of Gothenburg who was not involved in the research, agrees, and says the experiments offer quantitative evidence of things archaeologists had only been able to speculate about.
They also offer a new, individualized model for conducting research into ancient warfare, Molloy says. “We’ve only recently started to think of these as more personal possessions and look at how actual individuals were using weapons,” Molloy says. “This is a turning point—it lets us study what kind of actions were avoided and what risks you could take with a bronze sword. This shows that yes, they were used, and they were used skillfully.”