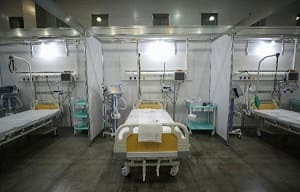 
Five coronavirus patients assigned to be treated in an intensive care unit (ICU) were recently found dead in a Russian hospital due to an alleged fire explosion of an overloaded ventilator unit. Russia's emergency ministry confirmed the deaths of the patients, and 150 people were evacuated in the hospital to protect the staff inside.Overloaded ventilator kills five COVID-19 patients in ICU
As first reported via Reuters, a hospital in the city of St. Petersburg in the country reported a fire explosion on Tuesday, May 12.

The fire killed five COVID-19 patients that were located in the hospital's ICU. Local reports said that an overloaded ventilator might have caused the fire. But investigations are still undergoing, as of today.

"Ventilators are at their limit. According to preliminary data, there was an overload, and the machine ignited, which caused the fire," one source told the Interfax news agency.

The Russian government did not confirm the official count of deaths due to the explosion but said that about 150 patients and staff were evacuated away from the hospital.
Russia has older versions of ventilators

However, this doesn't mean that they are already completely ready for the pandemic. The report says that most of Russia's ventilators were old or even broken.

Most of the ventilators were made in the year 1990s and lack of functionality with the newer models like screens that give the picture of the patient's breathing process.

"In Moscow, many (hospitals) may follow the best Western standards, and in some regions little has changed since the 1990s or the late Soviet times," Alexander Baunov, a senior fellow at the Carnegie Moscow Center think-tank, wrote on Twitter on May 3.

The number of new cases of the coronavirus in Russia rose by 11,656, as of Monday, a record daily increase, bringing the official total to 221,344.
Source