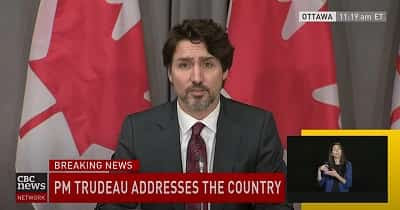 As countries throughout the world deal with the coronavirus pandemic, Canadian Prime Minister Justin Trudeau is taking advantage of the crisis by announcing an outright ban on 1,500 different makes and models of “military-style assault weapons.”

Since there is no legal definition for the terms “assault-style” or “military-style” in Canada, the vague wording essentially means all semi-automatic rifles.
In a Tuesday announcement Trudeau revealed that starting today, licensed gun owners are forbidden from selling, transporting, importing or simply using any of the 1,500 weapons listed by the government.
“These weapons were designed for one purpose and one purpose only: to kill the largest number of people in the shortest amount of time. There is no use and no place for such weapons in Canada,” the prime minister said. “Effective immediately, it is no longer permitted to buy, sell, transport, import or use military-grade assault weapons in this country.”
Watch Trudeau’s press conference below:

Trudeau also said there will be a two-year amnesty period for gun owners to turn in their recently outlawed self-defense tools, promising “fair compensation” to those who comply.


“All buyback programs will need to be made into bills, and so we will have to work with the other parties, with different groups throughout the country, to make sure that this buyback program (is) the best one, that it be fair, and we want it to have the necessary impact,” he said.
According to Justice Minister David Lametti, gun owners who fail to turn over their firearms will face sanctions under the Criminal Code.
“These weapons were designed for one purpose and one purpose only … to kill the largest amount of people in the shortest amount of time,” Trudeau said, adding, “You don’t need an AR-15 to bring down a deer.”
The main catalyst cited by Trudeau as his excuse for the sudden action was the recent mass shooting in Nova Scotia where 22 people were murdered.
However, it is worth noting that the Nova Scotia shooter obtained his firearms illegally and was not licensed to carry the weapons.
So, if the criminal didn’t obey the laws the country already had on the books why would he obey the new “assault weapons” ban?
Conservative Leader Andrew Scheer said, “Doing this at a time when Canadians are very concerned about this pandemic is completely unacceptable. Now is not the time to make these major policy changes, especially when they’ve proven so ineffective.”
The Canadian Sporting Arms and Ammunition Association wrote, “Trudeau gives no new details of potential semi-auto bans. All parties, Canadians should be concerned about this overstepping of emergency powers to forward an election agenda during a national crisis.”

Trudeau gives no new details of potential semi-auto bans. All parties, Canadians should be concerned about this overstepping of emergency powers to forward an election agenda during a national crisis #realsafetyonly #cdnpoli https://t.co/0fKWUufjFP
— CSAAA (@InfoCSAAA) April 30, 2020

Firearms used in previous Canadian shootings were specifically targeted, such as: