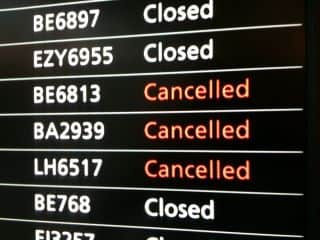 A majority of EU states back a move calling on Brussels to temporarily suspend a European law granting refunds for cancelled flights, Euronews understands.

Twelve governments urged the European Commission to suspend rules forcing airlines to offer full refunds instead of vouchers for future travel. France and the Netherlands spearheaded the push, which came during a meeting of European transport ministers on Wednesday.
The other countries behind the request were Belgium, Bulgaria, Cyprus, Czech Republic, Greece, Ireland, Latvia, Malta, Poland and Portugal. Euronews has been told that four more countries -- Germany, Spain, Romania and Estonia have added their voices in support.
It comes amid anger from passengers who had their flights cancelled because of the coronavirus lockdowns but were only offered vouchers in compensation.

In a joint statement, 12 member states 🇳🇱🇫🇷🇧🇪🇧🇬🇨🇾🇨🇿🇬🇷🇮🇪🇱🇻🇲🇹🇵🇱🇵🇹 ask @EU_Commission to amend the air passengers rights regulation to allow the temporary issuance of vouchers to preserve the EU air traffic market beyond the #COVID19 crisis. pic.twitter.com/Pkgx6Xbhr0
— Netherlands at the EU (@NLatEU) April 29, 2020

European regulations say passengers must be offered a refund if a flight is cancelled.
But there is now a push to get this EU law suspended temporarily to give struggling airlines vital breathing space.
"The COVID-19 pandemic has had an unprecedented impact on international transport, including air travel," the 12 EU countries said in a joint statement (PDF download).
"An immense number of flights have been cancelled. Air carriers are no longer generating passenger business, yet they continue to incur high running costs.
"Because of this, Regulation EC (No) 261/2004 and its obligation to reimburse cancelled tickets in cash, if the passenger so decides, places airlines in a difficult situation where they are facing a serious cash flow challenge.
"When the wording of the regulation was conceived, the current global crisis and its impact on air travel could not have been foreseen. The goal shared by the European Union and its member states must now be to preserve the structure of the European air traffic market beyond the current crisis, while considering the interests and necessary protection of passengers."
But the EU's transport commissioner, Adina Valean, told Euronews on Tuesday that she thought such a move was a bad idea.
“It’s not an option for me," she said. "I don’t think that this is the right path. I think companies have to put their energy and thinking into making the vouchers more attractive if they want to use mainly this instrument, but allow passengers to exercise their right to be reimbursed.”

However, a majority of EU states now back the move, an EU diplomat told Euronews later on Wednesday.
“The call showed a steadily growing majority of member states in favour of temporarily allowing airlines to only issue vouchers to customers. Germany, Spain, Romania, and Estonia supported the call made this morning by twelve member states. With 16 capitals explicitly in favour – some even put that number at 20 – there would be a strong enough majority in Council to quickly pass the necessary amendment. This means the ball is now in Commissioner Valean’s court,” the diplomat said.
Among other EU states, Euronews understands that Lithuania is "open for further discussion", while Slovakia and Italy asked for a "balanced approach". Austria, Denmark, Hungary, Finland and Sweden expressed doubts or asked to proceed with caution. Only Luxembourg explicitly opposed an amendment.
A Dutch official said: “(Infrastructure) minister (Cora) van Nieuwenhuizen noted that a majority of the Council has expressed itself in support of using vouchers to prevent airlines in a difficult situation from running into immediate money problems. Commissioner Valean stated in her reaction that the discussion is ongoing, also within the Commission. Together with other supporters, the Netherlands will discuss how to proceed.”
Air France-KLM is among the companies not offering refunds to passengers - despite receiving €11 billion in aid from the French and Dutch governments. KLM told Euronews that current regulations were not designed to deal with the exceptional circumstances of a pandemic.
"Regulations have been developed in anticipation of localized and short term disruptions," it said in a statement.
“No text envisaged the ban and travel restrictions that have begun in recent weeks. KLM believes that the issuance of a refundable voucher constitutes a fair solution and a reasonable balance between the protection of their passengers and the operational realities that every airline has to face.”
But European consumer rights organisation, BEUC, said travellers should not be the ones to bail out the airline industry.
“COVID-19 is putting consumers under an enormous financial strain," said BEUC director general Monique Goyens.
"Their right to reimbursement for cancelled travel is more important than ever.
"However, we’ve seen countless examples of airlines and travel companies undermining consumers’ rights by trying to push people to accept vouchers.
"Moreover, consumers should not be forced by governments to pick up the bill to bail out the travel industry.
"We need solutions that protect both the travel industry and consumer rights, without which consumer confidence in the travel industry could be permanently damaged”.
Euronews Political Editor Darren McAffrey said he believes some kind of change in the rules is now on the cards.
“When you look at the balance sheets of many of these companies they clearly don’t have the ability at the moment to refund millions of Europeans with the money,” he told Euronews Now.