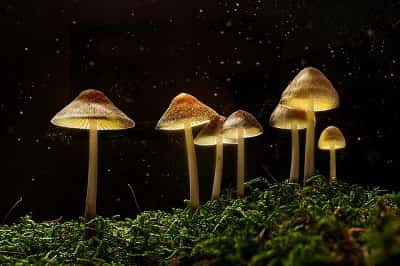 There's no reset button on your brain. But the more scientists learn about magic mushrooms, the more we know that they're about as close to a reset button as we can get.


Psilocybin — the hallucinogenic chemical in certain mushrooms — can reshape cells in the brain, and increasingly, shows potential for treating addiction or depression. Now, using new brain models, scientists are getting a better idea of how it all happens.
Scientists constructed a model of the human brain on psilocybin, illuminating how magic mushrooms allow our brain to access untapped potential. This model shows that, under the influence of psilocybin, the brain creates a feedback loop of neuron activity and neurotransmitter release (the chemical messengers that neurons use to communicate).
This finding was published Monday in Proceedings of the National Academy of Sciences.
That dynamic creates A ONE-TWO PUNCH that could allow the brain to TAP INTO OTHERWISE INACCESSIBLE STATES, including the "destabilization" of individual brain networks and the creation of a more "global" network across the brain.
That destabilization is one hypothesis that scientists have used to explain why magic mushrooms can create psychedelic experiences. But it could also underscore why it has potential as treatment for disorders like depression, explains Morten Kringlebach, the study's first author and a senior research fellow at the University of Oxford.
"Using this model will be crucial for truly understanding how psilocybin can rebalance neuropsychiatric disorders such as treatment-resistant depression and addiction," Kringlebach tells Inverse.

HOW DO MAGIC MUSHROOMS AFFECT THE BRAIN?

This study is based on brain images taken from nine participants who were either injected with psilocybin or a placebo. The scientists used those images to create a "whole-brain connectome" which provides a picture of all the physical neurons in the brain, as well as the activity of the neurotransmitters that are being shuttled back and forth.
During your average day in the human brain, neurons are constantly firing and neurotransmitters are traveling well-trodden paths through the brain, somewhat like cars on a freeway. On magic mushrooms, those networks are "destabilized", Kringlebach explains.
Previous research has shown that new networks appear in tandem. It's as if those cars on the freeway were given free rein to stray from the highway and take back roads towards new destinations.
Scientists are beginning to understand how this works. For instance, psilocybin (as well as psychedelics like DMT) mimic serotonin, a neurotransmitter related to feelings of happiness or love. Kringelbach suggests that these mushrooms do more than simply affect serotonin flow in the brain.
"We wanted to investigate the role of neurotransmission in dynamically changing the activity in whole-brain networks — and how this changes neurotransmitter release in return," he explains.
The models showed that the brain is able to tap into new networks by coupling the effects of neuron activity and the release of neurotransmitters, like serotonin. The release of neurotransmitters and the firing of neurons work together – and when you have one without the other, the whole system falls apart.
When the scientists adjusted their model to have these processes work independently, they found that they weren't able to recreate the same "destabilization" of networks that you would usually see when someone is on magic mushrooms. The same breakdown in their pattern happened when they replaced the typical serotonin receptors utilized by magic mushrooms (5-HT2A receptors) with other types of serotonin receptors.
Taken together, this suggests that both the receptors themselves, and the patterns of neuron activity are necessary for psilocybin to really work.
THE FUTURE OF MAGIC MUSHROOMS — Knowing that both receptors and neuron activity are needed, says Kringlebach, could help better understand how to use the drug as a therapy. In turn, these models can help us visualize an enduring mystery within the human brain, says Kringlebach.
"It has long been a puzzle how the brain's fixed anatomical connectome can give rise to so many radically different brain states; from normal wakefulness to deep sleep and altered psychedelic states," he says.
We only have a fixed amount of hardware in the brain, yet we're running highly complicated software that produces dreams, consciousness, and — if someone is on a drug like DMT — "breakthrough experiences."
If the magic mushrooms demonstrate anything, it's that the brain can learn to use its fixed hardware in very different ways, if the right ingredients are involved. The trick is figuring out what tools the brain needs to run different types of software on that hardware.
In the future, the team hopes that their model could help us learn how we can run different types of software in our brains, and in doing so, help treat conditions like depression.
"This new model will give us the much needed, causal tools for potentially designing new interventions to alleviate human suffering in neuropsychiatric disorders," Kringlebach says.

Abstract: Remarkable progress has come from whole-brain models linking anatomy and function. Paradoxically, it is not clear how a neuronal dynamical system running in the fixed human anatomical connectome can give rise to the rich changes in the functional repertoire associated with human brain function, which is impossible to ex- plain through long-term plasticity. Neuromodulation evolved to allow for such flexibility by dynamically updating the effectivity of the fixed anatomical connectivity. Here, we introduce a theoretical framework modeling the dynamical mutual coupling between the neuronal and neurotransmitter systems. We demonstrate that this framework is crucial to advance our understanding of whole-brain dynamics by bidirectional coupling of the two systems through combining multimodal neuroimaging data (diffusion magnetic resonance imaging [dMRI], functional magnetic resonance imaging [fMRI], and positron electron tomography [PET]) to explain the functional effects of specific serotoninergic receptor (5-HT2AR) stimulation with psilocybin in healthy humans. This advance provides an understand- ing of why psilocybin is showing considerable promise as a therapeutic intervention for neuropsychiatric disorders including depression, anxiety, and addiction. Overall, these insights demonstrate that the whole-brain mutual coupling between the neuronal and the neurotransmission systems is essential for understanding the remarkable flexibility of human brain function despite having to rely on fixed anatomical connectivity.