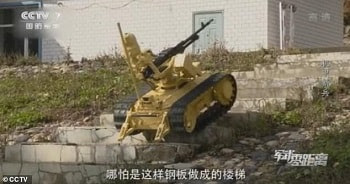 
The remote-control machine, described as 'small but lethal', is designed to travel through complicated terrains at a fast speed and replace human soldiers in dangerous scouting missions, according to state media.

Footage aired on state TV shows the so-called 'robot warrior' inspecting the surroundings, climbing various stairs, monitoring the enemy at night and firing at targets in a demonstration.

The tracked vehicle is named 'Sharp Claw 1' and can travel at an average speed of 10 kilometres per hour (6.2 miles per hour).

It recently joined the Ground Force of the People's Liberation Army (PLA) after making its debut at the Zhuhai Airshow in 2014.

According to the PLA Eastern Theater Command, which announced its official commission, the uncrewed ground vehicle can traverse all kinds of land, observe and target at the rival accurately and attack with ferocious firepower.

The thigh-high semi-autonomous war machine would be put to scout for information about the enemy in remote and potentially dangerous settings, reported state broadcaster CCTV.

It could free soldiers from risky tasks - be it in the wild or city – and react to situations more quickly than a human soldier, the report said.

But the robot would not be able to decide whom to attack or when to attack.

Military critic Bai Mengchen stressed that a human soldier would always be in charge of the machine remotely to avoid unnecessary or wrong kills.

'It can react much faster than humans, but the problem is it cannot improvise... therefore a human must supervise it and halt the task when deemed necessary,' Mr Bai told CCTV.