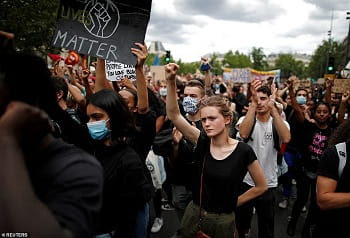 Tear gas and baton charges were used by police as they came under attack around the Place de la Republique, one of the French capital’s most famous protest squares.

Protests paying tribute to George Floyd, an unarmed black man who died during an arrest on May 25, have been seen across Europe today including in Prague, Czech Republic, Lausanne, Switzerland and Breda, the Netherlands.

A vast crowd had hoped to march in memory of Adama Traoré in Paris, a 24-year-old black Frenchman of Malian origin who died police custody in July 2016.

Family and friends said he died of asphyxiation, in the manner of George Floyd, the American said to have been murdered by police in Minneapolis, Minnesota, last month.

But Didier Lallement, the Paris police prefect, pledged that the French demonstration would not go ahead because of Coronavirus restrictions on public demonstrations.

He also said feared disturbances, and later added that police in the Paris regions were ‘neither violent nor racist’.

Some 3000 Traore supporters including his sister, Assa Traoré, turned up anyway, chanting ‘Justice for Adama’.

Ms Traoré said people should show their anger ‘at a time when the world, when France is outraged by the death of George Floyd’.

By 4pm, projectiles including stones were being thrown at the police, who began to make arrests.

Among those held were 12 far-Right counter demonstrators who unfurled a banner complaining about ‘anti-white racism’ from a rooftop on place de la Republique.

Mr Traore had run away from a police check in Beaumont-sur-Oise, a town north of Paris, and hours later died at a nearby police station.

The vague circumstances of the incident have led to allegations of a state cover-up, and his family have been fighting for justice ever since.

They say he died from asphyxiation caused by officers, while police claim Mr Traore died from a heart attack due to pre-existing medical condition.

There are frequent complaints about racist violence carried out by the French police, particularly in incidents involving young black men, or those from Arab backgrounds.

In 2017 four officers were accused of anally violating a 22-year-old called Theo Luhaka with a telescopic truncheon, causing him lifelong injuries, in the Paris suburb of Aulnay-sous-Bois.

It comes as police also face criminal charges for a series of allegedly racist attacks as they enforced curfews and other tough law and order measures during the Coronavirus crisis.

Prosecutors opened an enquiry in April after a 30-year-old motorcyclist from an Arab Muslim background was critically injured following a collision with an unmarked police car in Villeneuve-la-Garenne, which is less than 10 miles from central Paris.

This led to emergency workers including police becoming the target of rioters, who threw rocks and fireworks.

Earlier in the month, prosecutors in Béziers, in the south of France, announced that officers were facing criminal charges after a father-of-three died while under arrest for breaching the Coronavirus lockdown.

Three officers were videoed dragging Mohamed Gabsi, 33, along the ground during a curfew.

They are suspected of ‘intentional violence by a public official leading to manslaughter’ and ‘non assistance of a person in danger’.

The offences come with a potential combined prison sentence of 15 years plus, said local prosecutors.

The case is particularly sensitive because Mr Gabsi was a Muslim, and Béziers is run by a far-Right mayor who is supported by the National Rally party, which used to be called the National Front.
Source