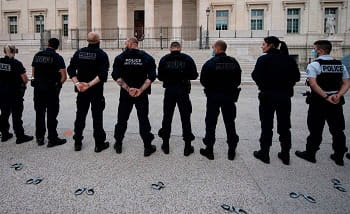 Police officers in France have carried out protests and thrown handcuffs on the ground, saying that they are “insulted” by claims that the police in France tolerates and perpetuates racism and abuse.

Police officers protested on Thursday in cities across the country, after several anti-racism protests took place last week against police brutality and racism on French soil.

The anti-racism protests led Interior Minister Christophe Castaner to ban the police “chokehold” on Monday, noting that several officers had “failed their Republican duty” and that the state intends to “track it down and combat it.”

The announcement led to protests by police officers, who believe “head restraint is very important during handcuffing” and that French police authorities should not be compared to those in the United States.

But experts disagree, noting that France has a long history of police brutality against the country’s Black and Arab populations.

“Both the United States and France are societies that are capitalist, racist and patriarchal,” Mathieu Rigouste, author of La Domination Policière, a 2012 book that argues current French police practices are rooted in the colonial era, told TIME. “They are constructed around this.”

Both domestic and international organizations have called out France for police brutality and racial profiling. In 2009, Amnesty International warned of “a pattern of de facto impunity” among French police officers. The Défenseur des droits, a non-governmental French institution charged with protecting the right of citizens, released a report in 2017 that denounced practices of racial profiling. And last year, Michelle Bachelet, the United Nations High Commissioner for Human Rights called for a “full investigation” into the excessive use of force by French police officers.

While the current anti-racism protests in France were partly inspired and in solidarity with those in the United States, they are also in response to the death of Adama Traoré, a black Malian-French man who died at the hands of police officers in 2016. On June 2, an independent autopsy found that his death was caused by the violent arrest by police forces, who have not been charged.