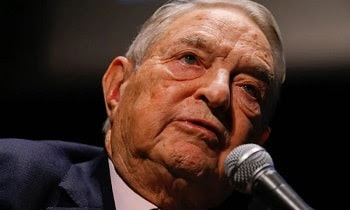 George Soros’ history of funding leftist movements including Black Lives Matter is proving unpopular with internet users, with many taking to Twitter to denounce the globalist billionaire as one of the financial architects behind the violent disturbances across the U.S.


Twitter users are hitting back against George Soros, punishing his posts with millions upon millions of angry tweets, accusing him of paying protestors to riot and funding Antifa, while some claim that he plans to radicalize African Americans in order to undermine society and further his globalist agenda.

“Soros needs to be under arrest for being an enemy of the USA… he is an international criminal!” said Conservative Lady in response to James Woods, who said “Our problem today is not black versus white. Our problem today is George Soros versus America.“ 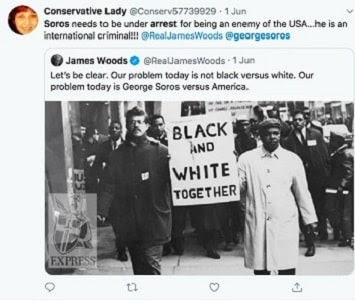 “The only danger is this man George Soros and his NGO’s,” said Denise. “He is responsible for Antifa. Arrest this man already for treason.“

“Arrest George Soros. Freeze his assets and get him off the backs of the people,” said Cara Byrne.

“Let’s focus all this protest energy and zero in on George Soros!” said Starlight Solutions. “Let’s march, and yell in the streets ‘ARREST GEORGE SOROS. And when he’s down, Bill Gates, then Clintons and Obamas. We are the people!”

It has been revealed by the Anti Defamation League that Soros is currently receiving around half a million negative mentions per day, as his political and philanthropic activities continue to enrage millions of Americans.

As protests – still largely peaceful, but increasingly marked by violent confrontations, looting and vandalism — continue in response to the murder of George Floyd by police in Minneapolis, right-wing pundits and an ideologically diverse crew of conspiracy theorists have alleged that George Soros has played a role in fomenting the chaos.

The vast majority of these tweets allege that Soros is paying protestors to riot, and that he funds antifa. A smaller number claim that he plans to radicalize African Americans in order to undermine society and enable the globalist takeover of America, while some go so far as to claim that George Floyd’s death was actually a false flag deployed by Soros in order to precipitate the current crisis.
Source