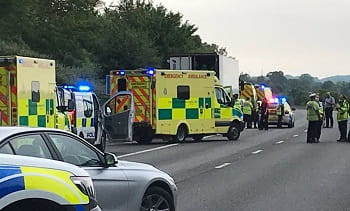 The M11 motorway between junctions 8 and 9 has been thrown into full police lock down following the discovery of a trailer full of migrants on Wednesday evening.

Highways England have put in closures in both directions following a request from Essex police.

Hundreds of drivers remain trapped following the discovery. Police opened the rear of the trailer and two migrants made of from officers. A Police helicopter has been called in attempts to track down the wanted men.

Officers called in Paramedics and a HART team to check the remaining who been in the trailer for sometime a source has revealed.

The group have been given water and medical treatment.

Officers say they will be passed to immigration officials to deal with. It is not clear if the driver has been arrested but is understood to have been questioned at the scene.

Essex Police and Border Force have been approached for comment.