After crazed leftists tore down virtually every historical statue in America Satanists may be planning to erect Luciferian statues in their place
(INTELLIHUB) — The Luciferian March for a One World Government will be held in at least 9 U.S. cities on June 21 during a solar eclipse.


The marches are intended to create chaos and it has been speculated by some that demonstrators may even try to erect satanic monuments at existing sites where Confederate and other allegedly racist statues have been torn down.

Most of the protests will take place at city capitols in the following cities:


What the F*CK is this?!https://t.co/VhW268NJ1A is promoting LUCIFERIAN marches... 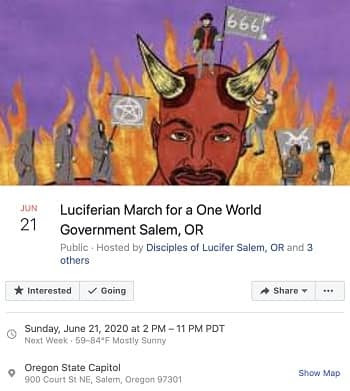 And if that is not enough, a rare solar eclipse is supposed to create a ‘ring of fire’ in the sky.


Solar Eclipse June 2020 Date and Time in India: The first solar eclipse of the year 2020 will occur this month on June 21. The event will be an annular solar eclipse where the Moon will cover the Sun from the centre leaving the outer rim visible, thus creating a ring of fire. Via Indian Express