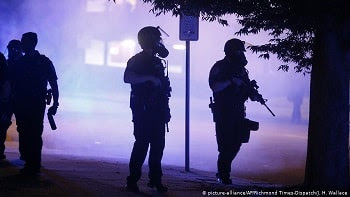 New Zealand has rejected the idea of a permanently deployed and armed US-style police force — despite last year's Christchurch massacre. Officials were not persuaded that the US model was worth pursuing.

Evaluations and public feedback — including 29,000 objectors in a petition —had made it clear, Coster said, that "Armed Response Teams" (ARTs), tested over 6 months, "do not align with the style of policing that New Zealanders expect."

"I have made the decision these teams will not be part of our policing model in the future," Coster said, adding his force was committed to being "generally unarmed" but given new body armor and more tactical training.

The world was stunned in March last year, when a lone gunman murdered 51 Muslim worshippers in two mosques in Christchurch, an otherwise relaxed hub on New Zealand's South Island, and wounded 40 others.

Parliament in Wellington tightened firearms laws, including a ban on semi-automatic weapons, with police overseeing a buyback of New Zealanders' guns.

"'We only have to look to the United States to see how violent things can get under a militarized police force," said Davidson, whose background is indigenous Maori.

Evaluation statistics made public by Coster's Wellington office, show that three experimental Armed Response Teams attended more than 8,000 events, but "did not discharge any firearms" during the six-month trial period ended in April.

Only 186 involved a firearm and a further 137 incidents a "cutting/stabbing instrument" [knives], said police evaluators.

29,313 petitioners told parliament's justice committee in May that "putting police with guns on the streets won't protect communities or help us feel safe."

Instead, they said, "institutional" racism already in "evidence" within the New Zealand Police was "more likely" to result in Maori and Pasifika [residents from South Pacific islands] being targeted.

New Zealand's response to the Christchurch massacre had been to show "our humanity" and "strengthening our social connection," said petitioners.

They cited a US Princeton University study that squads "similar to Armed Response Teams" were used mostly in non-emergencies such as enforcing search warrants and "did nothing to improve community or officer safety."

Policing methods worldwide are under scrutiny after African-American citizen George Floyd was killed in the hands of white Minneapolis police, sparking protests around the globe, including a Black Lives Matter protest in Auckland.
Source