Home » Space » The truth is out there: The Milky Way could be home to 36 alien civilisations, say scientists
Space

The truth is out there: The Milky Way could be home to 36 alien civilisations, say scientists 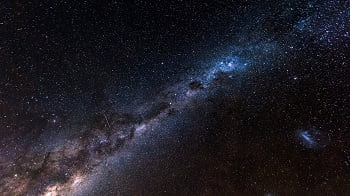 It's a cosmic question that has stumped humanity for generations: is there intelligent life beyond our planet?

There's still no conclusive proof that aliens are actually out there, but new research says that our galaxy could be home to 36 civilizations on other planets.

The study says that if life can evolve on other Earth-like planets, three dozen "intelligent civilizations" could exist across the Milky Way. They should also be capable of broadcasting signals into space in the same way that humans do.

"The way we define it is something, an intelligence, which communicates through technology like radio waves, sending lasers into space, optical light going into space, like from our cities, that kind of thing," said Christopher Conselice, a professor of astrophysics at the University of Nottingham and a co-author of the research paper, published in the Astrophysical Journal.

The findings hinge on a number of assumptions.

"The main calculation involves knowing how many stars in our galaxy could be old enough to host life," Conselice said in an interview on Euronews Tonight.


"We know how life forms on Earth and our own solar system. We know how long it took. We know what kind of metallicity – that is the kind of metals we have. And if you look at what other stars in our galaxy have those properties, you're able to come up with this number," he explained.

So, why haven’t we heard from any other life yet? That’s a decades-old question, also known as the Fermi paradox.

Conselice suspects that it’s because these types of communicating civilisations are "very rare" and their lifetimes not very long.

"It’s just that they’re so far away," he added, predicting it would take "thousands of years" for radio emissions from Earth to reach them.