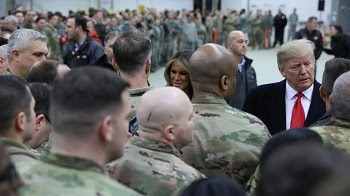 US President Donald Trump has confirmed rumors he was pulling almost 10,000 troops from Germany, saying that Berlin should live up to its commitments to NATO if it wants the US soldiers to stay.


“Germany as you know is...delinquent in their payments to NATO,” Trump told reporters at the White House on Monday, arguing that Berlin owes “billions” to the alliance. “Why should we be doing what we’re doing if they don’t pay?”

There are some 34,500 US troops currently stationed in Germany, and 25,000 would remain following the redeployment.

US media reported last week that Trump was “considering” directing the Pentagon to pull out 9,500 troops, but it was unclear whether the move would be permanent or temporary, or if they would be coming back to the US or going to another NATO country instead. Speculation about Poland being their destination was quashed by reports that Washington and Warsaw had not reached agreement on US basing rights, despite the Polish government’s public enthusiasm.

NATO members had pledged to increase their military spending to the 2 percent of their GDP, a target agreed during the Obama administration. Only a handful have since lived up to the pledge, however, and that number does not include Germany. Defense Minister Annegret Kramp-Karrenbauer promised last year that Berlin would hit the two-percent goal by 2031 "at the latest." Trump has repeatedly called this out as unacceptable, accusing the Europeans of freeloading on the US, which spends almost a trillion dollars every year on the military – and has seen its spending rise under the current president.

US troops have been stationed in Germany since 1945, initially as occupation forces after the end of WWII and later under the NATO umbrella. Washington continued to maintain this military presence even after the German reunification in 1991 and the complete Soviet withdrawal from what used to be the German Democratic Republic.