Home » US » VIDEO - D.C. Protesters Hail The Hero Of Swann St., Who Sheltered Them From Arrest
US

VIDEO - D.C. Protesters Hail The Hero Of Swann St., Who Sheltered Them From Arrest 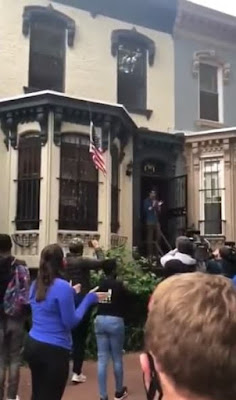 When Washington, D.C., resident Rahul Dubey realized dozens of protesters were facing pepper spray and arrest for violating curfew Monday night, he did what he says anyone else would do: He invited about 70 people into his home, to spend the night.


The protesters had been herded into Swann Street near Dupont Circle as police forces around the city used helicopters and flash-bang munitions in a crackdown on anyone violating the 7 p.m. curfew.

By the time they reached Dubey's home, the protesters, many of them young, were desperate to get away. But they were hemmed in by police.

"They unleashed sheer hell on peaceful protesters right outside my stoop," Dubey tells NPR's All Things Considered. "I don't know, I just flung the door open. And I just kept yelling, 'Come in. Get in the house, get in the house.' "

"Literally I can hear skulls being cracked," he said, describing a scene that he recalls as pandemonium.

For around 10 minutes, he says, people flowed inside. As they did, Dubey shouted directions, hoping to find room for them all in his row house.

"It was a full escalator, is what it felt like — just pouring into the house. I was screaming, 'Downstairs! Outside! There's a backyard! Upstairs! There's bedrooms!' " he says. "There was this bottleneck, and I didn't want anyone to get crushed, including myself."

D.C.'s Metropolitan Police Department made more than 300 arrests Monday night — most of them for violations of the curfew. Of that total, Police Chief Peter Newsham said, 194 people were arrested in the area of Swann Street NW.

Speaking at a news conference Tuesday, Newsham added that police were in regular communication with Dubey throughout the night.

Dubey says the unique layout of the area — Swann Street is a narrow, one-way street — made it a perfect place for police to box in a crowd of people on foot.

Once the group was inside, he says, people began trying to soothe their eyes, pouring milk and water over their faces.

"Everyone was coughing — we were all coughing for 45 minutes to an hour," Dubey says, adding that police officers also came up to his door and sprayed pepper spray into the house.

One of the protesters who was trapped was a woman named Jenny — who livestreamed her plight on Instagram and shared what was happening inside Dubey's home. Her name quickly inspired a hashtag: #savejenny.

By taking in dozens of strangers, Dubey was hailed as a hero by protesters and people following the story through social media.

"Rahul saved lives last night," one Black Lives Matter activist wrote on Twitter. "He ended this with an inspirational speech about not giving up and keeping up the peaceful fight. What a guy. Thank you Rahul."


Rahul saved lives last night. He ended this with an inspirational speech about not giving up and keeping up the peaceful fight. What a guy. Thank you Rahul. #SwannStreet #savejenny pic.twitter.com/e0SETLcSpw
— BLACKLIVESMATTER (@kikivonfreaki) June 2, 2020


But for hours, the police did not go away. Dubey, worried that anyone who left the house might be accused of breaking in, went around to each of his new guests, handing out his business card so anyone who ran into trouble could get in touch.

"They waited for us, man, like predators, so they could arrest us. We were doing no wrong in my house. I even said, 'They're my guests.' "

Eventually, help arrived from outside.

"My neighbors brought pizza — I'd never met them," Dubey says.

The protesters stayed until the curfew lifted at 6 a.m., when they began filtering out of the house. To get home, many received rides from strangers who had coordinated a volunteer effort online.

Dubey told a journalist from local TV station WUSA, "I didn't do anything special. I know most people would have flung open that door."

I found this very inspiring, Rahul Dubey of DC who sheltered ~50 protestors on #SwannStreet last night, after emerging, gave this interview to @WUSA9 and @slazo88

Despite the hardships, there were some "magical" moments in the house, he says. And he says he was impressed that the people in the group were, in his words, "doing their civic duty" by protesting.

"They were doing that with pride and peacefully. And I was proud," Dubey says.

And the protesters showed their gratitude. People offered money; they cleaned up the house.

"Those were the beautiful things, the hugs," he says.

But by around 2 a.m., Dubey says, he was forced to make two rules.

"No one was allowed to say thank you to me anymore, because it was, you know, 'Stop!' " he says. "The other rule was, they weren't allowed to ask me what my Venmo was."