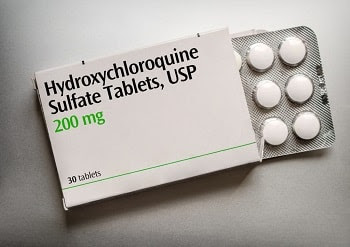 Peer-reviewed study found treatment cut the coronavirus death rate by nearly half in already sick patients.
Hydroxychloroquine, the controversial anti-malaria drug that President Donald Trump touted as a possible treatment for coronavirus, lowered the death rate of COVID-19 patients, according to a new study.

The Henry Ford Health System researched the effects of hydroxychloroquine in treating coronavirus patients and found the drug cut the death rate by nearly half in already sick patients. "Treatment with hydroxychloroquine cut the death rate significantly in sick patients hospitalized with COVID-19," the Henry Ford Health System stated.

"Our analysis shows that using hydroxychloroquine helped saves lives," Dr. Steven Kalkanis, Henry Ford Medical Group CEO and senior vice president and chief academic officer of the Henry Ford Health System, said. "As doctors and scientists, we look to the data for insight. And the data here is clear that there was benefit to using the drug as a treatment for sick, hospitalized patients."

The study found 13.5% of the coronavirus patients treated with hydroxychloroquine died, compared to 26.4% of patients who did not receive the drug.

"For hydroxychloroquine to have a benefit, it needs to be given before the patient suffers some of the severe immune reactions that can occur with COVID," Zervos, who co-authored the study with Henry Ford epidemiologist Dr. Samia Arshad, said.

The vast majority of the COVID-10 patients in the study were administered HCQ early, 82% within 24 hours, and 91% within 48 hours of admission.

"Our dosing also differed from other studies not showing a benefit of the drug," Zervos said of the study. "And other studies are either not peer-reviewed, have limited numbers of patients, different patient populations or other differences from our patients."

The Henry Ford medical team was aware that there were reports of heart-related side effects when using hydroxychloroquine sulfate. "The combination of hydroxychloroquine plus azithromycin was reserved for selected patients with severe COVID-19 and with minimal cardiac risk factors," the paper stated.

The study found that patients did not suffer heart-related side effects from taking the drug, and the medical team practiced "careful cardiac monitoring."


"Currently, the drug should be used only in hospitalized patients with appropriate monitoring, and as part of study protocols, in accordance with all relevant federal regulations," Zervos said.

Regardless of treatment, there was higher mortality rates for patients older than 65, whites, those with reduced oxygen levels, and people who required admission to the intensive-care unit.

Hydroxychloroquine is an FDA-approved drug used to prevent and treat certain types of malaria and lupus. Hydroxychloroquine became a national story when President Trump promoted the drug as a potential "game-changer." In May, Trump revealed that he took the drug for two weeks as a preventative measure after several White House officials were diagnosed with coronavirus.

In April, a Democratic representative in Detroit credited hydroxychloroquine for saving her life after she fell ill with COVID-19, and thanked Trump for bringing attention to the drug.

After the president announced he was taking the drug, Fox News host Neil Cavuto warned his audience, "I cannot stress enough, this will kill you!"

Earlier studies in April and May found that the controversial drug had no positive impact. A study published in Lancet that raised alarms about the safety of hydroxychloroquine as a coronavirus treatment, which many critics used to attack Trump, was retracted on May 22 after overwhelming criticism.

In June, the Food and Drug Administration ended the emergency use authorization that allowed physicians to prescribe chloroquine and hydroxychloroquine to treat coronavirus. The FDA doubted the effectiveness of hydroxychloroquine sulfate and chloroquine phosphate, and cited "serious cardiac adverse events and other serious side effects."