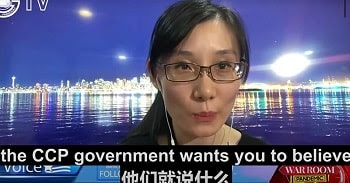 Dr. Yan fled China to expose one of the biggest scandals the world has ever seen

A virologist named Li-Meng Yan, who was a researcher at the University of Hong Kong’s School of Public Health, recently claimed the Wuhan coronavirus (COVID-19) was created by the Chinese Communist Party and that the World Health Organization (WHO) and Dr. Anthony Fauci are covering up for China.


In an interview with YouTube channel G-Translators last week, Dr. Yan explained that she’s been living “under the control of the CCP government for over 30 years,” making it easy for her to understand how the communists control the voices of local “authorities.”

Li-Meng arrived in The United States in April after she fled China to become a whistleblower whose goal is to expose the origin of COVID-19.

She said the Chinese government is taking their propaganda tactics, proven to be successful in their own country, and applying them in Western countries.

“So, for this purpose, they need to use international organizations like WHO,” Li-Meng noted.


Dr. Yan claimed the “negotiations” between China and WHO are a smokescreen where the two parties will secretly agree to a deal benefiting both sides.

After agreeing on a mutually beneficial deal, they will decide “what to tell the people, whether this is really from some bats, even the ‘one belt one road’ countries, or some poor animals they suddenly caught in Wuhan.”

Next, Li-Meng produced documents her team is set to release which allegedly show COVID-19 was derived from the “PLA-owned Zhoushan bat coronavirus.”

Describing how WHO has already helped cover-up CCP lies, Yan referred to a February WHO report praising China’s coronavirus response.

Dr. Yan says the virus could have been created at any lab owned by the People’s Liberation Army, because they own the Zhoushan bat virus strains that are “the backbone” upon which COVID-19 was created.

She also claims Wuhan Institute of Virology (WIV) scientist Shi Zhengli, also known as “Bat Woman,” tried to distract investigators from the Zhoushan bat virus strains by releasing a report on a coronavirus strain identified as RaTG13, which is closely related to COVID-19 as well.

Fauci, Yan said, knows all about the gain-of-function research being done in these labs owned by the CCP because he approved the funding.

In 2014, America banned gain-of-function research in The United States, leading Fauci’s National Institutes of Health (NIH) to funnel the research funding to the Wuhan Institute of Virology in China.

Another example of scientists using China to conduct experiments deemed immoral by the West is a doctor who performed gene editing on human embryos.

Li-Meng said the man behind this research, Dr. He Jiankui, was linked to prominent American scientists.

Ending her interview, Dr. Yan stressed to the audience that she believes, “This virus did not come from nature. This is a lab modified virus. If you let it go, even HCQ and vaccines will not work.”

In an interview with Steve Bannon’s War Room on August 2, Li-Meng said there is “zero chance” that the Wuhan coronavirus (COVID-19) evolved in nature.

She claimed the genome sequence of the virus shows it was man-made and that it even acquired a “focus on humans.”

Dr. Yan also alleged the Chinese government purposely gave the NIH the wrong genome sequence to hide the origin of the virus.
Will this brave woman’s story make national headlines or will mainstream media ignore this whistleblower’s groundbreaking allegations?
Source