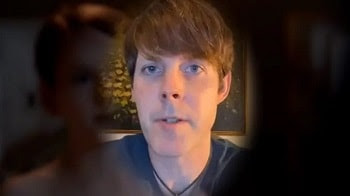 The entertainment industry is run by elite pedophiles who traffic and sacrifice children for their own depraved pleasure, according to Hollywood producer John Paul Rice who says “the most powerful six corporations in the land are all implicated in human trafficking of kids.“


“This issue of human trafficking, which many people are waking up to today for a variety of reasons, is the issue that defines all of us in our time,” says Rice, an L.A. based film producer who worked on Jerry Bruckheimer’s Remember the Titans before producing a string of critically acclaimed films.

“The media corporations, the most powerful six corporations in the land, in the world for that matter, are all implicated in human trafficking of kids.“

“And I would point for anyone anyone who wants to know more about that to Project Veritas and the leak disclosure of off-air footage of Amy Robach from ABC News when she found out and was discussing in 2016 that they had everything from Virginia Guiffre, everything, all of it, everything who was involved, they had all the evidence.

“Their own lawyer said ‘when all is said and done, Jeffrey Epstein will go down as one of the most prolific pedophiles in all of history, and they buried that story to have access to the Royal family, for which we know now Prince Andrew is implicated.


“They did not have any remorse for the victims in that video. This is a bigger problem because most people know in that world, and the world that I come from in Hollywood, that it’s a hidden layer that everyone knows is there. When the MeToo movement started in 2017 I reached out to my female actress friends who were prominent in LA, you would know them by name, and I said ‘What about the children? What about the children?’

“This is a child abuse system that we have been living in for a very long time and it’s been allowed to go on. And I will not be silent about this. Because it affects every single one of us.

“The people on television who smile at you, who tell you stories, who give you news, are the ones who hide all of this from us. They are not talking about the real issues. They are distracting you with division issues. This is a unification issue. When the Maxwell files came out 48 hours ago, I went on MSNBC, I went on CNN.com, I looked at every single one of their headlines and there was no mention of it whatsoever.

“This is a child issue, this is a human issue. This is not a political issue. It has nothing to do with left vs right, Democrat vs Republican, liberal vs conservative, or anything that you are or identify as in between.

“We are faced with a crisis of confidence in the leadership of our banking institutions, our media corporations, the Hollywood entertainment industry, the music industry.

“This is not about a bunch of young women who were having sex with older men and make it about a bunch of perverts. They raped and tortured these girls against their own free will. No matter whether they paid them or not, if you read these articles, and you listen to what Ghislaine Maxwell said about the girls they picked up in West Palm Beach trailer parks, she was asked ‘what about the young girls, what are we going to do to them?” she said “they are trash, they are nothing.” That’s a direct quote from the New Yorker.

“When I went and looked at edge.org which you can find out was a multi-billionaire club of people that was financed by Jeffrey Epstein. You can look up edge.org today and look up people under “G.” You’ll see Bill Gates on their as a contributing member of that organization. And you’d have to go back on the wayback machine and internet archives to see all the other people. Marina Abramovich was on there. Paul Allen was on there. All the heads of major industries were on there.

“And if you start reading some of the articles, one of which I have a direct link to, there is a direct quote on there, that said “Indeed human beings are, in our youngest years, among the most useless creatures in all of the animal kingdom.”

This is how they view children, through science. This is their expression.

“These are people who have no grounds to tell you what to think, what to do, so when they get up their and start espousing their views on social justice or whatever it is, know that you are hearing a scripted and controlled script that is going through a filter, and they are controlling and conditioning all these people through pedophilia.

“And there is another layer to this and it’s almost unbelievable to believe – that they also sacrifice kids. And I’ll give you one statistic you can look up and verify for yourself. If you go to UNICEF and you look up child sex trafficking, or human trafficking, you will find a statistic, globally worldwide, according to the United Nations, that 40 million people a year are trafficked around this world. 40 million.

“It’s a 150 billion dollar a year industry, for which it has very dark and ugly ties. And it goes all the way up into Wall Street and beyond. 5.5 million children every year are trafficked around the world. Most of them don’t live beyond 7 or 8, which means they have to replenish that supply chain.”