A videographer and investigator who goes by the name ‘Never Alone in Christ’ has found a secret encampment Antifa radicals have been using as their headquarters since the nightly riots began in Portland nearly 100 days ago.


The Antifa militants riot all night then head back to their tent city to sleep all day and plot the next night of violence and destruction when the sun goes down.

While the videographer was filming the Portland Antifa HQ, one of the radical leftists emerged from a tent with a slingshot and started firing rocks at him.


At one point a well-known anarchist, Camillo Massagi, known as “Trumpet Man”, came strolling out of a tent in sandals. “Trumpet Man” looked exhausted, perhaps because he was arrested and released the night before.

The fabled #AntifaHQ of Portland has been located. The war encampment that houses the #PortlandProtests and all of its demonic secrets are now laid bare to the world. The city is housing them and they have more toilets than The Chaz. Full video @YouTube https://t.co/zhNt2uBrpw pic.twitter.com/hfwmYimM3g
— Alan Bings (@AlanBings) September 3, 2020


Another investigator visited the site of the Antifa encampment and took high-quality photos of the headquarters and signs on its fences.

According to one sign, the “village” is a temporary shelter created by “city workers, community organizers and organizations” in order to provide a safe place to stay during the COVID-19 pandemic.

“These villages were formed by the group C(3)PO which stands for Creating Conscious Communities with People Outside.

“The project is sponsored by The City of Portland, the Joint office of Homeless Services and coordinated by JOIN.” 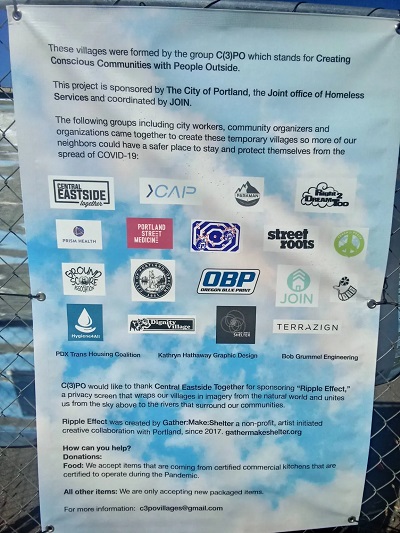 Social media users pointed out the tents all have plywood bases. “Totally organized, who’s paying for all this?” said @sunshine_jmv.

“So if this is owned and supplied (toilet facilities, etc) by the city of Portland, wouldn’t the mayor and city council be providing aid and comfort/aiding and abetting to rioters? If any of them were from out of state, would that fall under RICO statutes?” said @evilchemiteacher.

“This is disgusting that the city is protecting them and asking for federal dollars with the other hand,” said Lianna M.