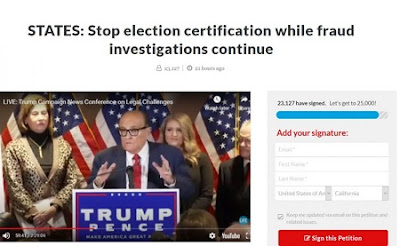 (LifeSiteNews) — Momentum keeps growing for LifeSite’s petition asking the 50 state legislatures not to certify election results until all claims of voter fraud have been investigated and litigated. More than 23,000 people have signed the petition so far.

“The petition, which was launched less than 24 hours ago, is growing quickly,” said Scott Schittl, one of LifeSite’s petition coordinators. “The fact that so many people have signed so quickly shows that Americans want to hear all of the evidence and see a just outcome, whichever way that goes.”

The claims of voter fraud made by Team Trump are very alarming. Here are some of the worst:
All of these claims are backed up by sworn affidavits of people who allegedly witnessed these fraudulent actions take place, the Trump campaign argued.

“This petition is more important than usual, as counties and states begin to certify their election results,” said Schittl. “Time is literally of the essence.”

Indeed, grave concerns about the certification process have already resulted in controversy in Michigan. Republican election officials in Wayne County (greater Detroit) claim that they were pressured to certify the county’s election results, and misled by state authorities who guaranteed that an audit of the county’s results would be done.

Now, Michigan state authorities say that no audit will occur.

In any case, such controversies have only served to strengthen calls for a full probe of alleged election fraud and voting irregularities. People continue to speak up all around the country and demand that their states wait to certify election results until all claims of voter fraud have been fully investigated and litigated.