5G interactions with bioengineered COVID is no laughing matter 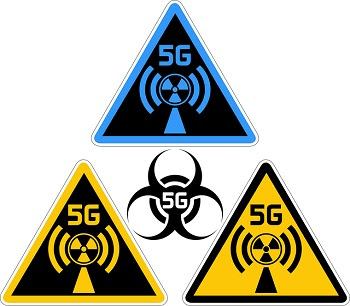 In a satirical piece for Under the Button, writer Scott Newman imagines a scenario in which the Chinese Communist Party comes up with a next-generation version of COVID-19.
He jokes that “COVID-20” will be an improvement over the previous rendition thanks to its higher chance of transmission, greater mortality rate, and 5G connectivity.
He wrote: “All that was next was to link the novel coronavirus to 5G networks, enhancing its ability to wreak immunological havoc and break the people’s psychic will.”
That may be an entertaining thought, but the truth is that 5G is no laughing matter. In fact, it’s already quite threatening on its own and could end up causing bioweapon-level destruction without help from any viruses. The CCP and any other groups that wish to wreak havoc don’t need to bother creating a 5G-equipped virus because the technology is already infecting much of the world on its own.
Scientists have long been sounding warning bells about the dangers of 5G, and while some areas are taking these concerns seriously and halting rollouts, others are moving forward at full throttle.
We should all be concerned about 5G
One big problem is the fact that the FCC is sticking to exposure limits for radiofrequency radiation that date back to the 1990s.
Think about it for a minute: Back then, we did not have 5G, 4G, 3G or even 2G; wireless communications were dramatically different in the ‘90s and to say that the standards are outdated is an understatement.
We have learned quite a lot about the dangers since then, and although we don’t have a lot of long-term studies given how little time these technologies have been in use, that’s precisely what is so frightening here.
With 5G comes the introduction of the use of millimeter waves, and that takes this technology to an even greater level of danger. Short-term exposure to millimeter waves can impact the cardiovascular and nervous systems as well as the immune system, which means that being exposed to 5G might just reduce your body’s ability to fight off illnesses like COVID-19. Your skin and cornea can absorb these waves, putting you at risk of melanoma and ocular melanoma as well as sterility. And if someone like China does come up with a bioweapon, our systems will be quite vulnerable. Plus, 5G has a very limited reach, so cell antennas are going to be placed roughly every 100 to 200 meters.
That means they’ll be pretty much everywhere, so even if you don’t get a 5G-enabled phone or opt not to use it, you’ll probably be exposed anyway.
Many of us won’t really have a lot of choice in the matter. Another big warning was issued by the International EMF Scientist Appeal, which was signed by more than 200 scientists across more than 40 nations, all of whom have published peer-reviewed research on the health and biological effects of non-ionizing radiation and radiofrequency radiation in wireless communications. Sent to the World Heath Organization and the United Nations, the letter identifies concerns such as reproductive system problems, cellular stress, a higher risk of cancer, learning and memory defects and neurological disorders as some of the risks of the technology, and they point out that it also affects plants as well as animals.
Even the well-respected, pro-science publication Scientific American’s editorial board has printed a piece against 5G, which some have likened to a “global human experiment without consent.” So while the idea of a “new and improved” COVID with 5G capabilities might be worth a laugh or two in some corners, the truth is that 5G is pretty scary on its own and doesn’t need the help of any bioweapons to wreak havoc across the planet.
Sources for this article include: UnderTheButton.com NaturalNews.com
Source
Think your friends would be interested? Share this story!
Tags 5G, Health, News, Science, World
Newer Post Older Post