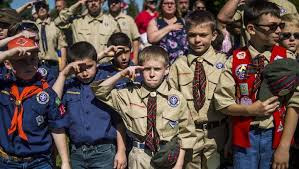 The number of Boy Scouts who say pedophile leaders raped them has risen to a staggering 90,000 after the Monday deadline for filing a claim against the Boy Scouts of America passed.

The claims are part of the organization’s bankruptcy proceedings.

“We are devastated by the number of lives impacted by past abuse in scouting and moved by the bravery of those who have come forward,” the Boy Scouts admitted in a statement. “We are heartbroken that we cannot undo their pain.”

“The response we have seen from survivors has been gut-wrenching,” the statement continued.

“We are deeply sorry.”


Breitbart.com reports: According to the Associated Press (AP), the organization “intentionally developed an open, accessible process to reach survivors and help them take an essential step toward receiving compensation.”

“They spent millions trying to encourage people to come forward,” Andrew Van Arsdale, a lawyer with a network called Abused in Scouting, said in the AP report. “Now, the question is whether they can make good on their commitment.”

AP reported on the latest developments:

The potential size of the fund is not yet known and will be the subject of complex negotiations. The national organization is expected to contribute a substantial portion of its assets, which include financial investments and real estate. The Boy Scouts’ insurers also will be contributing, as will the Boy Scouts’ roughly 260 local councils and companies that insured them in the past.

The bankruptcy has been painful for the 110-year-old Boy Scouts, which has been a pillar of American civic life for generations. Its finances were already strained by sex abuse settlements and declining membership — now below 2 million from a peak of over 4 million in the 1970s.

Most of the pending sex abuse claims date to the 1960s, ’70s and ’80s, before the Boy Scouts adopted criminal background checks, abuse prevention training for all staff and volunteers, and a rule that two or more adult leaders must be present during activities.

Although Monday was the deadline for claims against the national organization, AP reported that one attorney involved in the case said new claims could still be filed against local councils depending on state limitations laws.

“More sexual abuse claims will be filed in the Boy Scouts bankruptcy than all claims filed against the Catholic Church throughout the nation,” the Torts Claimants Committee said.
Source