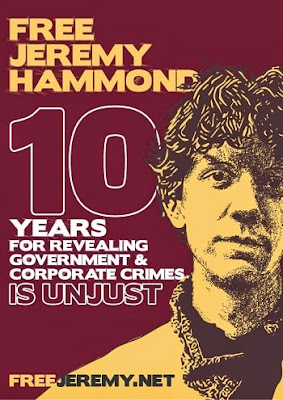 First reported by the Associated Press on Wednesday, November 18th, hacktivist Jeremy Hammond is finally set to be released (to a ‘halfway house’) from federal prison, 7 years and 3 days to the date from his initial sentencing, after having been incarcerated for the majority of his ten-year prison term.

‘Jeremy Hammond, who is serving a 10-year prison sentence will serve out the remainder of his term in a Chicago halfway house, a U.S. Bureau of Prison spokesman said Wednesday’

Hammond is a computer programmer, and internet activist/whistleblower associated with the hacktivist network Anonymous who had been sentenced to ten years imprisonment on November 15, 2013.

The sentence came about for breaching the servers of private intelligence firm Strategic Forecasting, Inc. also know as Stratfor, and releasing millions of internal documents to the transparency advocacy organization WikiLeaks.
This exposed evidence that the intelligence consulting firm had been conducting illegal operations acting as spies for hire on behalf of governments and corporations against several human rights defenders and activist groups.

The documents released by Jeremy revealed damning information about the activities conducted outside of public view by this supposed security analyst company, that some have since dubbed a “shadow CIA”.

One batch of documents revealed, as covered by RT, show that Stratfor operatives coordinated with Texas Department of Public Safety officers to infiltrate, conduct surveillance operations on, and subvert the activities of activist groups such as Occupy Wall Street, and the Deep Green Resistance all while committing violations of their civil liberties and constitutional rights.
Another set of emails, reported by The Times Of India, purportedly exposed some of Stratfor’s international operations as they allegedly also conducted surveillance against environmental activists in the Indian city of Madhya Pradesh, as a contractor for Dow Chemical, monitoring the activists protesting against the gas leak which lead to the 1984 Bhopal disaster.


A statement from WikiLeaks regarding the emails released by Hammond alleged:

They reveal the inner workings of a company that fronts as an intelligence publisher, but provides confidential intelligence services to large corporations, such as Bhopal’s Dow Chemical Co, Lockheed Martin, Northrop Grumman, Raytheon and government agencies, including the US Department of Homeland Security, the US Marines and the US Defence Intelligence Agency.

While these allegations are shocking, Stratfor wasn’t the only target in which Jeremy intended to peel back the curtain of corruption. A number of additional targets included military computers, private intelligence suppliers, and law enforcement agencies. The leaks included private documents revealing information from the mundane, to the downright contemptuously corrupt.
In an after-trial statement released by Hammond he said:

I did this because I believe people have the right to know what government and corporations are doing behind closed doors. I did what I believe is right.

Going to such lengths to hold Big Brother accountable, all the while knowing the fate it will bring you, is a level of courage we should all strive for. It should come as no surprise then that, though Jeremy’s legal troubles began upon his arrest at his Chicago home in March of 2012, the US Justice System brought all its weight to bear against the brave young man who dared expose their secrets.
Initially, the court fought for a maximum penalty a 40 years to life, though ultimately settling for a maximum of 10 years after his acceptance of a non-cooperative plea deal to charges from the Computer Fraud and Abuse Act for his actions against Strategic Forecasting, Inc.
In an ironic twist, it was also later revealed that unbeknownst to him at the time, while Jeremy was hacking Stratfor, and simultaneously receiving directives to hack foreign targets from one of the leading individuals of a sub-sect of Anonymous called LulzSec, that contact turned out to be an undercover FBI informant.
Later in an interview with The Guardian, Jeremy stated:

It is kind of funny that here they are sentencing me for hacking Stratfor, but at the same time as I was doing that an FBI informant was suggesting to me foreign targets to hit. So you have to wonder how much they really care about protecting the security of websites.

Truer words never spoken, painfully exemplifying the depths of hypocrisy within the US government.
Since he began serving his sentence Jeremy still hasn’t shied away from his principles or from holding the system accountable for its abuses — even in the face of cruel and unjust treatment by prison officials, and innumerable smear pieces by the mainstream media labeling him a terrorist.

In September of 2019, as the US Justice Department was pursuing its charges of espionage against WikiLeaks founder Julian Assange, Hammond was transferred against his will from a medium-security facility in Memphis to a Bureau of Prisons processing center in Oklahoma City. He was then transferred to Alexandria, Virginia to testify before a Grand Jury in the Eastern District of Virginia regarding his relationship to Assange and the anti-secrecy website.
At the first day of testimony Jeremy boldly proclaimed before the Grand Jury he would choose “silence over freedom” rather than betray his friends and principles. For his lack of cooperation he was held in contempt until March of this year.
His defense attorneys indicate that by that time Jeremy should have already been released by the Bureau of Prisons to a halfway house or home custody. However, because of the onset of the Covid-19 pandemic all prisoner movements were frozen.


Hammond himself has been among many to condemn this decision as inhumane. “You know it’s been months, we’ve had no fresh air, no sun, at a time when our immune system needs to be the strongest because of the coronavirus, they’re starvin’ us,” he said in June as his legal team filed an appeal for compassionate release due to the circumstances of the coronavirus.

Amidst all of this he has continued to speak out about the abysmal and woefully inadequate conditions prisoners are subjected to, even in the midst of a pandemic. He’s been shuffled from facility to facility, gaining an even greater first-person perspective of the egregious way the American prison-industrial-complex treats its inmates, and detailing his accounts in statements released by his support network website freejeremy.net.

Seven tumultuous years after this brave cyber warrior dared to stand up and strike back against the abuses of a vicious empire to defend what is right, seven years as a political prisoner for telling the truth, seven years of suffering slander and mistreatment at the hands of his own government — finally, the 35-year-old activist that many have dubbed ‘the electronic Robinhood’ will get to see daylight as he so rightfully deserves.

About the author – Don Via Jr. is an independent researcher and journalist from central Virginia, who has for the last ten years dedicated his time to studying history, political science, geopolitics, and covert operations, and raising awareness about government corruption and abuses. He is the founder of the up-starting independent media page Break The Matrix, where more of his work can be found as well as on associated social media on MeWe, Twitter, and Minds.