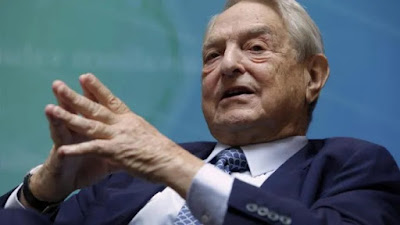 By Niamh Harris - Hungarian Prime Minister Viktor Orbán has lambasted billionaire globalist George Soros as “one of the most corrupt people in the world”.

His comments came after Soros called on the European Union to make Hungary and Poland submit to ‘open society’ values.

“George Soros is threatening Hungary and Poland” Orbán told Kossuth Rádió on Friday, in reference to the arch-activist’s public lobbying of the EU.

Breitbart reports: “George Soros is one of the most corrupt people in the world; he has plenty of politicians in his pocket who now want to blackmail Hungary and Poland for access to EU funds,” the Hungarian leader continued, accusing the billionaire spreading “absurd, beyond-the-red-line statements” about his country.

Soros had claimed, among other things, that “Orbán has constructed in Hungary an elaborate kleptocratic system to rob the country blind. The amount by which he has enriched his family and friends is difficult to estimate but many of them have become exceedingly wealthy” in a recent article — not without a certain level of irony, considering his own vast fortune and past conviction for insider trading.


Hungary and Poland are clashing with the EU establishment and its globalist allies after their recent decision to veto its proposed seven-year budget, which contained provisions that, in the view of Polish justice minister Zbigniew Ziobro, would have reduced them to “political and institutionalized enslavement“.

At surface level, the provisions in question where uncontroversial, committing EU member-states to upholding European values and the so-called “rule of law”.

The Hungarians and Poles, however, saw in them a mechanism to deprive conservative countries of their share of EU funds if they would not submit to the policy agendas of the EU’s dominant states — principally Germany and France — which have been incensed by the persistent refusal of Hungary and Poland to accept their efforts to impose compulsory migrant redistribution quotas.

The EU also objects to Poland’s efforts to reform its courts. The EU characterises the reforms as an attack on judicial independence, but the Poles insist they are merely an attempt to undo a nepotistic legacy of the former communist regime (and a domestic matter in which foreign officials should not be interfering, in any case).

“In the 1989 Roundtable Talks between Poland’s Communists and the democratic opposition, then-president General Wojciech Jaruzelski – the man who ran Poland’s martial law government for the Soviets – was allowed to nominate an entirely new bench of Communist-era judges to staff the post-communist courts. These judges dominated our judiciary for the next quarter-century. Some remain in place,” Polish prime minister Mateusz Morawiecki explained in 2017.

Poland and Hungary do have some reason to believe the rule of law provisions would have been used as a way of forcing compliance, with European Parliament vice president Katarina Barley, of Germany, having suggested they should be “starved financially” before the vote at which they exercised their veto.

Soros, for his part, attempted to paint the Polish-Hungarian veto as selfish and irresponsible, “coming at a moment when Europe is suffering from a dangerous surge of COVID-19 cases” — although the Polish and Hungarian governments might reasonably retort that it was not their decision to tack punishment clauses for supposed values violations onto a budget which might have restricted its scope to coronavirus relief and economic measures.

“The EU can’t afford to compromise on the rule-of-law provisions. How it responds to the challenge posed by Orbán and [Polish leader Jarosław] Kaczyński will determine whether it survives as an open society true to the values upon which it was founded, the billionaire insisted.

“If you ever wanted to know how the Soros plan works, here it is,” said Hungary’s Secretary of State for International Communication and Relations, Zoltán Kovács, in a direct response.

“[George Soros] suggested fiscal penalties against those who do not accept migrants back in 2015. Today we see financial blackmailing & political retribution operationalized by EU institutions,” he explained.

“Make no mistake, the EU’s ‘rule of law debate’ has never really been about actual ‘rule of law’. If we look back at the last five years, we can see clearly how the topic of rule of law has gained momentum every time the EU’s liberal, pro-migration forces fail to impose their will on Member States, like Hungary and Poland, that oppose migration,” he elaborated in an official blog post, providing a timeline of events.
Source