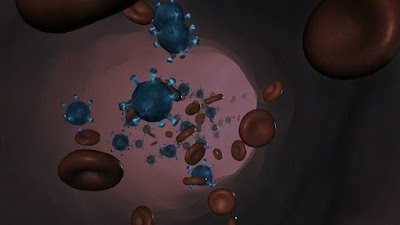 People with a type O blood are 12 per cent less likely to catch the coronavirus than other blood types, a study has found.

It also reveals that those with a negative blood type (O-, A-, B- or AB-) are, on average, 21 per cent less likely to get the virus than people with a positive type.

Individuals with type O or negative blood are also 13 per cent and 19 per cent less likely to develop severe symptoms or die, respectively.

In the UK, around 15 per cent of the population have a negative blood type and almost half (around 48 per cent) are type O.

Researchers from the Institute for Clinical Evaluative Sciences in Toronto studied 225,556 people who had a blood test between 2007 and 2019 and a Covid swab this year.

Every person has one of four blood types, either A, B, AB or O and the difference in blood groups depends on the presence or absence of specific attachments on red blood cells called antigens.

There are two antigens, A and B. An individual can have one of these, both (AB) or none (O).

The presence, or absence, of these molecules dictates what blood type a person is.

There is another antigen, but there are not four possibilities, just two, and this is called the Rhesus antigen.

Erroneously named after the monkey, a person is either Rh positive or Rh negative.

Statistical analysis accounted for all other variables and comorbidities and found the adjusted relative risk for SARS-CoV-2 infection is 15 per cent higher in type AB than in type A.

Infection is five per cent less likely in type O than A, but when compared to all blood groups, this grows to 12 per cent, the researchers found.

'There were 1,328 cases of COVID-19 with severe illness or death, with higher probabilities among AB and B blood groups as well as those who were Rh+,' the researchers write.

Those with blood type B are at 21 per cent higher risk for severe illness following infection than those with type A.

'In this study, which was done within a universal health care system with widespread SARS-CoV-2 testing, O and Rh− blood groups were associated with a slightly lower risk for SARS-CoV-2 infection as well as severe COVID-19 illness or death,' the researchers write in their study, published in the journal Annals of Internal Medicine.

The findings align with previous research from China which found a similar protective effect of certain blood types.

Researchers assessed 2,173 people who had been diagnosed with the coronavirus, including 206 people who died after contracting the virus, from three hospitals in Hubei.

Academics compared the data of the infected Wuhan patients with 3,694 non-infected people in the same region.

Of the 206 patients in the study who died, 85 had type A blood, equivalent to 41 per cent of all deaths.

In the healthy Wuhan population, a city of 11 million people, 34 per cent of people are type A.

In the study cohort, 52 of the people who died were type O, making up a quarter of all deaths. Under normal conditions just 32 per cent of people are type O.

The figures for all infections, not just deaths, are 26 per cent and 38 per cent for type O and type A, respectively.
Source
Think your friends would be interested? Share this story!
Tags CoronaVirus, CoV-19, Health, News, Science, World
Newer Post Older Post