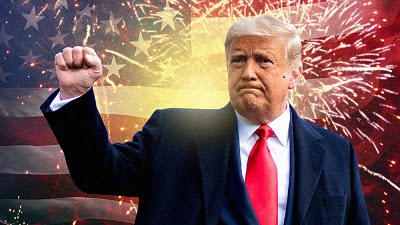 President Trump tweeted on Friday night claiming that he is the actual victor in Pennsylvania and Georgia, two states that have been called for Joe Biden by CNN and then other networks using CNN as their excuse.
He also blasted Georgia’s Brad Raffensperger as a RINO. And Twitter put a new label on his tweets because of it. (Article by Fred T republished from TheRightScoop.com) In his Pennsylvania tweet, Trump said that 700,000 ballots had not been “allowed to be viewed” and that because of that, “based on our great Constitution” his campaign wins the state. He also said in a later tweet that “Everyone knows that we won” in Georgia. Twitter put a new label on the tweets.

700,000 ballots were not allowed to be viewed in Philadelphia and Pittsburgh which means, based on our great Constitution, we win the State of Pennsylvania!

Georgia Secretary of State, a so-called Republican (RINO), won’t let the people checking the ballots see the signatures for fraud. Why? Without this the whole process is very unfair and close to meaningless. Everyone knows that we won the state. Where is @BrianKempGA?

Brad Raffensperger is the RINO who ordered the hand recount, which sounded like it was in the best interest of truth but turns out to be a sham.

If this goes forward, all it will do is bake in the results of the shenanigans pulled by the Democrat machine in Atlanta and in Fulton County which seems to have had a helluva lot of “good luck” in handing a “win” to Joe Biden. Worse, it won’t even provide the political cover the legislature would need to right the situation by certifying its own slate of electors to offset the ill-gotten gains in this election.

But back to Twitter. What do they mean by official sources? As far as we can tell this means the media, since the winner is not officially declared until the electoral votes.
Source