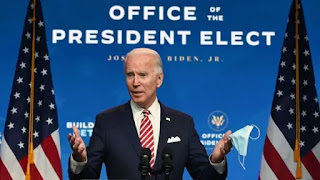 The Pentagon has abruptly ordered a to halt to briefings to Joe Biden’s transition team.

Acting defence secretary Chris Miller ordered the Pentagon-wide pause on cooperation with the incoming Biden administration in a move that has stunned leadership, according to a report by Axios which quoted senior administration officials.

Miller, who replaced former defence secretary Mark Esper when he was fired by Trump, reportedly issued the order to cancel all scheduled meetings on Thursday night.

In an effort to downplay the move, a senior Defence Department official told Axios that the order was a “simple delay of the last few scheduled meetings until after the new year”.

The Independent reports: While it was unknown what prompted the order, which a top Biden official was so far unaware of, it comes after intelligence agencies failed to meet today’s deadline on delivering a classified report to Congress on foreign interference in the 2020 election.


The Director of National Intelligence, which serves as head of the US Intelligence Community that includes the Department of Defence, announced on Wednesday that “a number of agencies have not finished coordinating on the product”.

Amanda Schoch, ODNI Director of Strategic Communications: "This afternoon the DNI was notified by career intelligence officials that the Intelligence Community will not meet the December 18 deadline, set by Executive Order and Congress..." (1/3)

It also comes as the intelligence community scrambles to respond to a massive cyber attack that breached multiple federal agencies, including Defence, State, Treasury, Homeland Security, Commerce, and the Department of Energy’s National Security Administration, which is responsible for the country’s nuclear arsenal.

The Department of Homeland Security is holding classified briefings for Congress on Friday to outline how the scope and scale of the hack are wider than the 18,000 SolarWinds Orion customers who installed the back-door about six months before the presidential election, according to Reuters.

Homeland Security reportedly issued a bulletin on Thursday to warn the attack targeted multiple US agencies and included targets outside of those that used the compromised SolarWinds software.

“The SolarWinds Orion supply chain compromise is not the only initial infection vector this APT actor leveraged,” said DHS’s Cybersecurity and Infrastructure Security Agency, referring to “advanced persistent threat” adversaries, according to Reuters.

While it was unknown if Donald Trump was involved with or approved of the Pentagon’s move, senior advisers began publicly supporting the decision on Friday.

Trump campaign adviser Steve Cortes responded on Twitter saying Biden “could not get even a low-level security clearance right now”.

“He’s compromised by the Chinese Communist Party,” Mr Cortes said in a tweet.

Good! Joe Biden could not get even a low-level security clearance right now. He’s compromised by the Chinese Communist Party.

The role of China in the presidential election was reportedly behind the delay in the classified report to Congress on foreign interference in the 2020 election missing the 18 December deadline.

Quoting people familiar with the matter, Bloomberg reported that the director of National Intelligence, John Ratcliffe, refused to sign-off on the report unless it more fully reflected the national security threat posed by China.

The new information being assessed that came in the weeks before and after the election was said to include tech companies and attempted to amplify messages across social media that Mr Trump is a white supremacist.

The content of the report could have far-reaching ramifications in the president’s continued challenge of election results.

Set by an Executive Order signed in September 2018 called “Imposing Certain Sanctions in the Event of Foreign Interference in a United States Election”, it gives Mr Trump the ability to impose wide-ranging sanctions against whoever is identified in the report, which includes seizing property, restricting access to financial institutions, and “any other measures’ under the law.
Source