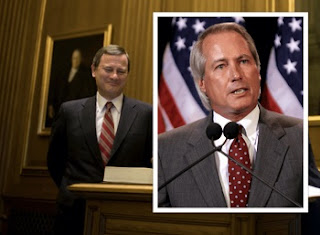 Well, Lin Wood just went for broke….
In a Tweet storm today, he went after Chief Justice John Roberts, claiming in no uncertain terms that Roberts WAS indeed the same John Roberts on the flight manifesto to Jeffrey Epstein’s pedo island.
Here is that flight log if you’ve never seen it: 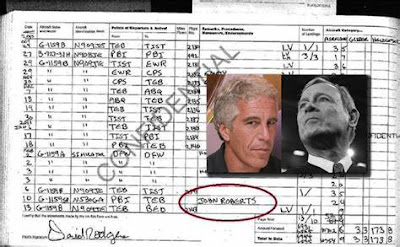 It’s long been wondered/disputed whether or not this John Roberts was THE John Roberts from the Supreme Court.
It’s a common enough name.
But today Lin Wood wanted to remove all doubt.
First was this:

This may be most important tweet of my life.
Chief Justice John Roberts is corrupt & should resign immediately. Justice Stephen Breyer should also resign immediately.
They are “anti-Trumpers” dedicated to preventing public from knowing TRUTH of @realDonaldTrump re-election.
— Lin Wood (@LLinWood) December 17, 2020

I have long had questions about “the John Roberts” on Jeffrey Epstein private jet flight logs. I suspected it was our Chief Justice. MSM has shown no interest in investigating issue to find TRUTH.
America is now entitled to know the answer.
Every lie will be revealed.
Pray.
— Lin Wood (@LLinWood) December 17, 2020

Corruption & deceit have reached most powerful office in our country - the Chief Justice of U.S. Supreme Court.
This is a sad day for our country but a day on which we must wake up & face the truth.
Roberts is reason that SCOTUS has not acted on election cases. Others involved.
— Lin Wood (@LLinWood) December 17, 2020

He then says he not only has the evidence but that it’s been disbursed into the hands of third parties.
I assume for safe keeping for the right time:

The documentation of my claims about Justices Roberts & Breyer has been placed in hands of several third parties.
When one cannot attack message, all too often messenger is attacked.
But TRUTH cannot be denied. It cannot be destroyed. I have made sure of that TRUTH.
- Lin 🙏
— Lin Wood (@LLinWood) December 17, 2020

The time is now Lin, let’s see it!
Anyone else remembering how Kim Clement said three Supreme Court Justices would be “removed”?
Are we about to witness another one of his prophecies come to life right before our very eyes?
I think so.
But Lin Wood wasn’t done yet.
Then he dropped this bombshell:

Yes folks, he is claiming to have evidence (recorded conversation?) whether Roberts said to Breyer quote: he would make sure “the mother f#*ker would never be re-elected.”
Now do you see why our Supreme Court acted the way they did?
Complete lawlesness.
It cannot stand.
More:

By the way, if my date below is incorrect by a couple of months, just ask Chief Justice John Roberts. He can give you the exact date of his incriminatory phone conversation. While you have his attention, ask him some other questions. He owes The People answers. He owes us TRUTH. https://t.co/8pPduB7Cr1