The “Great Conjunction” On December 21st 2020: People Are Saying There’s Going To Be An “Event” 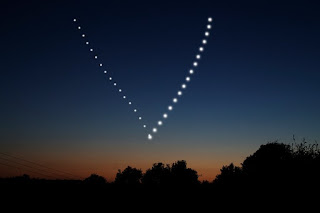 In the spiritual/truther community, talk of a big event has been a common theme for more than a decade. This usually includes a giant solar flare that will completely wipe out the electrical grid, some sort of event that will upgrade human DNA, some sort of mass extraterrestrial sighting, or something along those lines that will bring about big changes and transform our world as we know it forever.

Many people thought something like this was going to happen on December 21st 2012, it didn’t. Many have suggested various other dates since then, and they usually correlate with great astrological events, like the one that’s set to take place on December 21st, 2020, less than two weeks from now. Again, a portion of this community believes some sort of big event is going to happen, but based on these predictions that seem to have been a constant in the spiritual/truther community, nothing noticeable is going to happen. That being said, I am open to the idea of the possibility of some sort of event that’s truly special, but the idea of waiting for something to take place that will completely change the human experience as we know it today just doesn’t resonate with me, although I wish it would.

To be honest, I wouldn’t be surprised if it did given everything that’s happening on our planet. But I do know one thing, humanity must learn to live together in peace and good will.

If there’s one thing I’ve learned over the years, we are the ones that will change things, and are changing things. Waiting for something outside of us to do that, I believe, is not the message of this special time that many of us feel we are living in. Furthermore, I believe we are currently living through and witnessing this “event” as a process that continues to speed up every single day, month and year.

Perhaps from the perspective of elsewhere this “event” is occuring in a blink of an eye, and perhaps from our perspective it’s a process of many years. Who knows?

What’s Going To Happen: On December 21st of this year, the winter solstice, Jupiter and Saturn coincidently will appear to almost merge in our night sky, appearing almost as one giant star to the visible eye. They are usually separated by 400 million miles. I personally don’t believe it to be mere coincidence that such a close alignment is happening on the winter solstice, and I do believe this to be a very special event, possibly with tremendous implications, implications for human consciousness that we may not even recognize. I’m just not sure if we will be able to quite see these implications play out how some think they may, I do believe some people may be able to feel something, but ultimately I believe that for your average person, nothing will be noticed at all, despite the fact that, again, I do believe it is a very significant event for multiple reasons.


“Alignments between these two planets are rather rare, occurring once every 20 years or so, but this conjunction is exceptionally rare because of how close the planets will appear to one another,” Rice University astronomer Patrick Hartigan said in a statement. “You’d have to go all the way back to just before dawn on March 4, 1226, to see a closer alignment between these objects visible in the night sky.”

According to LiveScience, “Before the very close 1623 great conjunction, which was likely impossible to see from Earth because the planets appeared so close to the sun, the last visible and seemingly intimate meeting between Jupiter and Saturn happened in March 1226.”

Jupiter and Saturn are going to be an astonishing 0.1 degrees apart — less than the diameter of a full moon. This is truly a special event for us to witness, and again, given my belief in the cosmos and their connection to human consciousness, I do believe it to be extremely significant, with huge implications as humanity moves forward. The word “conjunction” is used by astronomers to describe the meeting of objects in our night sky, and the great conjunction occurs between the two largest planets in our solar system: Jupiter and Saturn.

Every 200 years they cross each-others path in a different sign, this year we are moving from Earth to Air, which is also why many believe this is significant. That being said, it’s important to mention here that I don’t know much about astrology, and I am not an expert.

I also believe that it’s been confirmed that major astrological events and changes directly correlate with human consciousness. Human consciousness is shifting dramatically and the way we perceive ourselves, the human experience, the cosmos and the nature of reality is rapidly changing, and again, I do believe this is directly correlated with the activity of the cosmos. We already know that cosmic activity affects all biological systems on Earth, probably in ways we have yet to understand or even notice. I believe this is why we are starting to ask ourselves why we live the way we do, and why do we do the things we do. We are starting to ask deeper questions about the human experience, and many of us are starting to see that we have the potential to create a much better human experience, one that resonates deeply with who we are. All of this, in some way I don’t understand, is connected to the movement of the cosmos as our consciousness is connected to all. All is one.

Many believe we are also transitioning into the Age of Aquarius, a time of prosperity, truth, transparency and light, from a dark age that’s lasted thousands of years. Although the beginning of this age is highly debated, we seem to be in the cusp of it in my opinion. This correlates with various ancient viewpoints and indigenous prophecy as well. Our current age that we are now transitioning out of is described in The Mahabharata, a time when mental capabilities reach their lowest point and moral virtue is stripped from the Earth. As independent researcher Bibhu Dev Misra writes, when the “World Soul” is full of blackness and corruption, and only a small fraction of virtue remains, it “slowly dwindles to zero at the end of the Kali Yuga. Men turn to wickedness; disease, lethargy, anger, natural calamities, anguish and fear of scarcity dominate. Penance, sacrifices and religious observances fall into disuse. All creatures degenerate. Change passes over all things, without exception.”

“As we know from Ancient Egyptian History, these events are symptoms of psychic changes that always appear at the end of one platonic month, and at the beginning of another. They are, it seems, changes in the constellation of psychic dominance, of the archetypes or gods, as they used to be called, which bring about or accompany long lasting transformations of the collective psyche. This transformation started within the historical tradition and left traces behind it. First, in the transition from the age of Torus to that of Aries, and then from Aries to Pisces, whose beginning coincides with the rise of Christianity (mentioned above). We are now nearing the great change, which may be expected, when the spring point, enters Aquarius.”

These periods apparently mark very important social psychological change in the life of individuals, and the collective.

You can listen to Manly P. Hall, recognized as one of the world’s leading scholars in the fields of religion, mythology, mysticism, and the occult, discuss this time we are now transitioning into, here, where he discusses Carl Jung’s book on the UFO phenomenon linked above. This phenomenon is one of many that’s creeping into the collective mind because, again, we are in this time of transition and consciousness expansion. It’s just one of many examples, it’s not hard to see if you look at the world we are living in today. A lot is going on

I believe these changes, events, and energies that may be coming to Earth impact us greatly and that it happens little by little over time, and that we are currently experiencing it. I believe this coming winter solstice is probably another one of those moments, but I do believe this type of thing is ongoing. I don’t think something major is going to happen that’s going to change life as we know it in one day, but again, but who knows? One hundred years, or one thousand years in our years may be a millisecond for those who are watching from somewhere else. Perhaps our perception of time distorts how we perceive events that truly do have a giant impact on human consciousness.

Our documentary Collective Evolution III provides a more indepth and detailed discussion of this topic if you’re interested.