US university grafts scalps from aborted babies onto ‘humanized’ mice 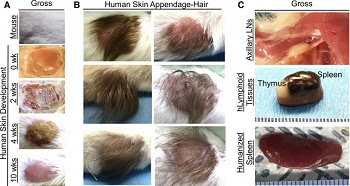 (LifeSiteNews) — The University of Pittsburgh is conducting medical research by grafting scalps from aborted babies onto rodents.
After publishing a report in the National Catholic Register about the many ways that aborted children are being used for scientific research at major universities and hospitals in the United States, author Stacy A. Trasancos tweeted a summary of her horrifying findings. She links the mengelian research to U.S. COVID-19 guru, Dr. Anthony Fauci:

These are crimes against humanity that should be prosecuted. Silence in the face of these atrocities simply adds to the evil. Wake up America! Demand that this stops NOW! https://t.co/sKkDNOfLBJ

In “How Aborted Children Are Used in Medical Research in 2020,” Trasancos explained that while currently there is heightened interest in the use of aborted fetal cell lines in COVID-19 vaccine research and production, the use of electively-aborted children by university, government, and industrial scientists for research is shockingly commonplace.

In a scientific report published at Nature.com in September, University of Pittsburgh research scientists explained unselfconsciously the basis for their study: “Human skin is a significant barrier for protection against pathogen transmission. Rodent models used to investigate human-specific pathogens that target the skin are generated by introducing human skin grafts to immunocompromised rodent strains.”

The researchers write that “Human fetal tissues were obtained from the Health Sciences Tissue Bank at the University of Pittsburgh. Human fetal tissues for constructing humanized rodents were handled and processed under biosafety level 2 conditions.”

Trasancos uncovered that the “full-thickness fetal skin was taken from humans aborted at the gestational age of 18 to 20 weeks of pregnancy at the Magee-Women’s Hospital and the University of Pittsburgh Health Sciences Tissue Bank.”

“Full-thickness human skin from fetuses was grafted onto rodents while simultaneously co-engrafting the same fetus’s lymphoid tissues and hematopoietic stem cells from the liver, so that the rodent models were humanized with organs and skin from the same child,” wrote Trasancos.

“From the aborted fetuses, thymus, liver, spleen and full-thickness skin were transplanted and grafted onto the rodents and allowed to grow. Then the rodent models were given a staph infection on the skin to study how the internal organs responded,” she added.

The human skin grafted over the rib cages of rodents grew blood vessels and immune cells, and human hair grew on the grafted fetal scalps. As Trasancos notes, “ Images literally show a patch of baby hair growing on a mouse’s back.”

Mothers reportedly provided written consent for their aborted children to be used in this research.

The research was supported by the National Institutes of Health (NIH) and the National Institute of Allergy and Infectious Diseases (NIAID), which has been headed by Anthony Fauci, M.D., since 1984. NIAID has partnered this year with Pharmaceutical giant Moderna to develop a COVID-19 vaccine.

Trasancos went on to cite two other recent studies that used aborted children.

For one in which researchers at the University of California and the California Environmental Protection Agency assessed exposure to certain fire retardants in unborn children, a total of 249 women scheduled for a second-trimester abortion were recruited. Trasancos summed up the disturbing nature of the research:
The paper emphasized the need for further study of fetuses in this gestational range. These second-trimester fetuses essentially lived their short lives in utero as analytical machines and then were used to provide information to keep children living in society safe.

For a third study, development of immunities in newborns, published in the journal Science, a team at Yale University’s Department of Immunology dissected the bodies of fifteen children aborted in the second trimester of pregnancy, removing their liver, bone marrow and spleen.

Trasancos noted that this research was also funded by NIH as well as by a fellowship at Yale and Pew Charitable Trusts.
Trasancos concluded:

At a fundamental level, life-saving research ought to preserve human dignity. The fetal specimens described in these scientific papers — the children who were killed and dissected like the best kind of lab rats — all deserved to be named and counted in the human family.
They were more than a statistic in a table of chemical exposure levels, or a chart of PBDE levels across maternal-placental-fetal biological matrices, or a chunk of scalp grafted grotesquely onto a rodent. They were unwanted children who were killed by an industry that exploited them to make the lives of the wanted humans better. Catholics have a duty to demand better from scientists.
According to her biography, Stacy A. Trasancos has a doctorate in chemistry and a master’s in dogmatic theology.
Source
Think your friends would be interested? Share this story!
Tags News, Science, World
Newer Post Older Post