FAA Responds To Numerous Reports Of A UFO Over Hawaii 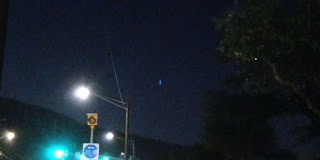 The FAA was notified after multiple people reported seeing an Unidentified Flying Object (UFO) in the sky over Leeward Oahu on Tuesday evening. Witnesses all over the region called into 911 at around 8:30 p.m.

Officials with the Federal Aviation Administration said that there were no aircraft incidents or accidents in this area at the time of the reports, but multiple witnesses reported seeing a large blue object fall out of the sky and into the ocean.

Some of the witnesses managed to get video or photos of the incident.

Witness Misitina Sape told Hawaii News Now she captured a photo of the object at 8:26 p.m. near Haleakala Avenue in Nanakuli.

Another witness named Moriah said she had never been a believer in UFOs until she saw the object fall from the sky.

“I started calling my husband and them because they were all in the garage. I was like hey. Come look up there. See if you see what I see. They all said yea!” Moriah said.

They jumped in the car to follow the object and see what it was.

About three miles down the road, they saw the object fall into the water.

She said that it was larger than a telephone pole but didn’t make any sound when it hit the ground.

“We called 911,” Moriah said, “For have like one cop or somebody for come out and come check em out.”

She also says that they saw another light in the sky after the blue object fell into the water. She says that police saw the second light as well.

“My husband went look up and he seen the white one coming,” she said. “The white one was smaller. Was coming in the same direction as the blue one.”

FAA spokesperson Ian Gregor said the agency received a report from police Tuesday night about a possible plane down in the area “but had no aircraft disappear off radars. And no reports of overdue or missing aircraft.”
Earlier this year, the Pentagon announced the formation of a new task force that will be studying UFOs or “Unidentified Flying Objects.”

The formation of this new task force was revealed last year when the Pentagon acknowledged that military pilots were encountering aircraft that might not have been made by humans.

The new task force was officially revealed to the public after the Pentagon released declassified videos that appeared to show government aircraft interacting with UFOs in the sky.

One of the videos, taken from US Navy aircraft, seems to show the pilots chasing a UFO off the east coast of the United States.

Navy pilots reported spotting the objects flying around 30,000 feet in the air at hypersonic speeds and showing no visible engines or exhaust plumes typical of any known aircraft currently on Earth.