Germany to hold people who refuse to quarantine in detention centres 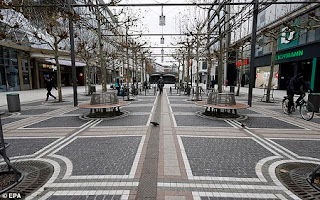 (DailyMail) - Germans who refuse to quarantine after being exposed to Covid will be held in detention centres under new rules prepared by regional authorities.

The eastern state of Saxony has confirmed plans to hold quarantine-flouters in a fenced-off section of a refugee camp set to be build next week.

The regional state claimed that the facility will only be used for people who have repeatedly flouted lockdown rules around self-isolation.

Baden-Württemberg in south-west Germany will use two hospital rooms to detain repeat offenders, who will be guarded by police.

In Brandenburg, authorities will detain a section of a refugees centre, while Schleswig-Holstein will use an area within a juvenile detention centre.

Legal experts told Die Welt that state governments have powers to detain people for breaching quarantine rules under the Disease Protection Act, passed by the German Bundestag last March and renewed in November.

The plan has been widely criticised, with AfD MP Joana Cotar accused the Saxony government of 'reading too much Orwell'.

German authorities have come under fire for their management of the pandemic, with proposals to impose national vaccine mandates in a bid to control the virus branded 'social dynamite' by opposition figures.

It comes as Chancellor Angela Merkel considers imposing a 'mega-lockdown' and suspending public transport after sparking a public backlash in the UK by calling 'mutant' Covid the 'British virus'.

Mass-selling newspaper Bild reported Ms Merkel wants to effectively shut down the country almost totally, amid a general fear of the fast=spreading variant of coronavirus first detected in southern England.

Countries in Europe are bracing themselves for the impact of the new variant of Covid-19, which has caused daily cases to drastically increase in the UK, driving up the number of hospitalisations, and ultimately deaths.

In neighbouring France, the government is expected to announce new restrictions on Thursday, also amid fears of the UK variant, but unlike some of its neighbours a full lockdown appears off the agenda for now.

Jean-François Delfraissy, head of the scientific council advising the government on the epidemic, told France Info radio on Wednesday that the UK variant accounted for an estimated 1 percent of new Covid-19 infections.

This, he said, was not enough to justify closing schools in the country, saying 'We think English data on the variant are not definitive enough to lead us to recommend the closing of schools in France.'

While the new variant is yet to become widespread in Germany, experts are concerned that their current coronavirus measures are not strict enough, especially given the new strain is seemingly more contagious than that of the first wave.

The head of Germany's country's disease control agency claimed that Germany has too many loopholes in its coronavirus lockdown rules, and said he believed that people were travelling more than in the first lockdown.

Lothar Wieler, president of the Institute, said data indicated people in Germany are travelling more than during the first phase of the pandemic in spring, contributing to the virus' spread.

German authorities have imposed restrictions on social contacts, largely closed schools and limited travel for those in areas with high infection rates, but the rules aren't uniformly enforced across the country's 16 states.

'To me, these measures we're now taking aren't a complete lockdown,' said Wieler. 'There are still too many exceptions and they aren't being strictly implemented.'

Officials are considering tougher restrictions to curb the continued rise in infections.

While Germany's total deaths per capita since the pandemic began remain far lower than many of its European neighbours, its daily per capita mortality since mid-December has often exceeded that of the United States.

Germany's daily death toll currently equates to about 15 deaths per million people, versus a 13 U.S. deaths per one million.

France on Wednesday recorded around 23,000 new cases of Covid-19, around half the number detected in Britain on the same day but still far above the 5,000 figure the government had been aiming for by mid-December.

Among the measures floated to try to avert a much-feared third wave of infections amid an uptick in cases linked to the British variant include expanding a 6:00 pm curfew in place in parts of the east to a national level.

Most of France is still subject to an 8:00 pm curfew imposed in mid-December when a second national lockdown was lifted.

Bringing it forward by two hours would stall the 'apero effect', said the leader of President Emmanuel Macron's Republic on the Move party, Stanislas Guerini, referring to the French tradition of meeting up for a pre-dinner aperitif.

France is warily eyeing the spread across its territory of a new variant of the virus discovered in Britain, which is believed to be highly contagious.

'We have established a protocol that aims to test up to a million children and teachers per month,' he said, adding that children as young as six could be tested.

Veran said that, unlike Britain, France had no plans to close schools 'at this stage' but said the government might reconsider if the share of infections caused by the mutated strain grew.

On Tuesday, he told a Senate commission that the new variant accounted for about 1 percent of infections.

Speculation had been swirling that France was preparing to follow the example of Austria, Britain, Israel and Portugal among other countries in imposing a third nationwide lockdown.

But several government sources told AFP there were no such plans afoot for now.

Germany's Wieler pointed to the sharp spike in infections recently seen in Ireland as an example of how quickly the outbreak can escalate again if rules are relaxed, especially given the new seemingly more contagious variant of the virus circulating there and in neighbouring Britain.

All infections with the variants so far confirmed in Germany involved people who had travelled outside the country, said Wieler.

'We need to be very careful, especially of the British mutation of this virus,' Ralph Brinkhaus, the parliamentary leader of Merkel's bloc, told broadcaster n-tv. 'So we don't yet know what further measures will be necessary in coming weeks.'

To ease the strain on working families having to look after school-age children and discourage them from using emergency care facilities, parliament passed a bill Thursday doubling the amount of paid parental leave to 40 days for 2021.

Public health insurances will pay out up to 112.88 euros ($137) a day to parents if they stay home to care for children under 12 who couldn't go to school because of the pandemic.

Germany initially managed the pandemic better than its neighbours with a strict lockdown last spring, but it has seen a sharp rise in cases and deaths in recent months, with the RKI saying people were not taking the virus seriously enough.

RKI president Lothar Wieler said on Thursday restrictions were not being implemented as consistently as they were during the first wave and said more people should work from home, adding that the current lockdown needed to be tightened further.

Germany introduced a partial lockdown in November that kept shops and schools open, but it tightened the rules in mid-December, closing non-essential stores, and children have not returned to classrooms since the Christmas holidays.

Hospitals in 10 out of Germany's 16 states are facing bottlenecks as 85% of the beds in their intensive care units were occupied by coronavirus patients, Wieler said.

A meeting of regional leaders planned for Jan. 25 to discuss whether to extend the lockdown into February should be brought forward, said Winfried Kretschmann, the premier of the state of Baden-Wuerttemberg.

Chancellor Angela Merkel was due to speak to ministers on Thursday about ramping up production of vaccines.

So far only about 1% of the German population has been vaccinated, or 842,455 people, the RKI reported.

Wieler said wearing heavy duty respirator masks, also known as FFP2, could help protect against 94% of particles, but only if worn correctly. The state of Bavaria has made FFP2 masks compulsory on public transport and in shops from Monday.

Germany has so far recorded 16 cases of people with a fast-spreading strain of the virus first detected in Britain and four with the strain from South Africa, Wieler said, although he admitted gene sequencing of samples was not being done broadly.

Wieler urged people who were offered a COVID-19 vaccination to accept it to relieve the strain on hospitals and said people should stick to social distance and hygiene rules.

'At the end of the year we will have this pandemic under control,' Wieler said. Enough vaccines would then be available to inoculate the entire population, he said.

In France, Prime Minister Jean Castex said on Thursday that he was happy to see that citizens were becoming more accepting of the country's vaccination programme.


The French are among the most sceptical in the world towards vaccinations, according to France24.

'I'm happy to see that the vaccination programme is being more widely accepted – it is excellent news for our country,' he said while visiting a vaccination facility in the east of France.

France has promised to expand its vaccination programme after being criticised for its slow progress. With Israel setting the example, administering 23.66 vaccines people per 100 people, the UK is fourth, with 4.52 per 100 people.

Germany is further down the list, with 0.9 vaccinations per 100 people. France, meanwhile, is not in the top 17 countries in the world, with 0.38.

The president of the scientific council set up to advise the government on the pandemic, Jean-Francois Delfraissy, said France was 'in a sort of race' to get the most vulnerable citizens vaccinated before the new variant made further inroads.

After an excruciatingly slow start to the vaccination drive in late December, for which Macron's government drew widespread condemnation, the pace of inoculations has picked up.

So far 247,000 people have received the first jab, a number set to rise sharply in the coming days as the vaccines are rolled out to all people aged over 75 starting on Monday.

Until now, the campaign was focused on people in care homes as well as health workers, firefighters and domestic workers aged over 50.

The government had rejected accusations of being a vaccine laggard, saying high levels of resistance to the jabs in France required a cautious approach.

Speaking during a visit to a vaccination centre in the northeastern city of Metz on Thursday, Prime Minister Jean Castex noted with satisfaction that vaccine scepticism was starting to decline.

He predicted a 'stampede' for the injections among over-75s. 'Things are falling into place but people will have to be patient,' he said.
Source