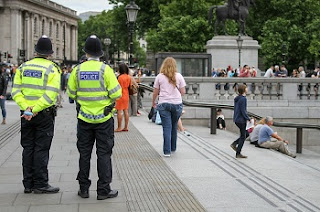 The Mail Online reports: The edict comes as Scotland Yard warned its officers will take a harder line as they issue fines ‘more quickly’ to people caught without a mask, or outside without a reasonable excuse.

In a statement about its ‘stricter enforcement approach’, the force said: ‘Londoners can expect officers to be more inquisitive as to why they see them out and about.’

As the country is put in the grip of its third national lockdown, police insist they will clamp down harder on suspected rule breakers.


Mr Jamieson said: ‘For the small minority of people who refuse entry to police officers and obstruct their work, the power of entry would seem to be a useful tool.

‘I have raised this issue with the policing minister previously and clarity on the power of entry would help police officers enforce the new Covid regulations more easily.’

Before Christmas, Mr Jamieson said officers would break up family celebrations if they flouted lockdown rules over the festive period. The police chief also warned about Hanukkah and Diwali celebrations.

But his cash-strapped force came under fire earlier this week after advertising for a new £74,000-a-year ‘fairness and belonging’ director to ‘oversee improved inclusive culture throughout the workplace’.

The new role at West Midlands police, which includes 28 days of leave a year plus bank holidays and a ‘generous’ pension, comes as the force continues to face a funding shortage that has seen 2,000 officers lost since 2010.

Critics slammed the force for ‘wasting’ money on the ‘pointless’ role and for prioritising ‘wokeness’ over the demands of frontline policing.

In a statement this morning, the Met said: ‘In practice this will mean that all those attending parties, unlicensed music events or large illegal gatherings, can expect to be fined – not just the organisers of such events.

‘Similarly, those not wearing masks where they should be and without good reason can expect to be fined – not reasoned with.

‘Additionally, with fewer ‘reasonable excuses’ for people to be away from their home in the regulations, Londoners can expect officers to be more inquisitive as to why they see them out and about.’

The force last month implemented a new digital fines system, making it ‘quicker and easier for officers to issue fines on the spot.’

Since its launch, more people have been reported for fines ‘than in the rest of the year combined’, the Met said.
Source