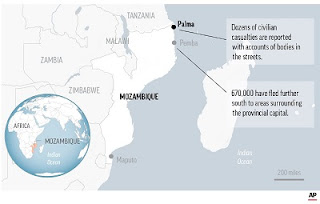 The security situation on the African continent is close to chaos. Once again, terrorist groups advance in Mozambique and leave innocent victims, drawing the attention of international society to the structural failure in the current mechanisms to combat terrorism in Africa.

Last Wednesday, terrorists invaded the Mozambican city of Palma in a brutal attack on shops, banks, hotels, and a military base. Dozens of people died during the attack. There are hundreds of wounded, many in serious condition. According to reports by survivors, while escaping the shootings, civilians hid on a beach in the region, where a large number of decapitated bodies were spread. Official figures are still being counted.

Palma is a city located in the province of Cabo Delgado, a region with a Muslim majority. The dispute for political control of the region has been operated by several terrorist militias. These militias belong to the terrorist group Al Shabab, which is an African regional branch of ISIS. Al Shabab's activities are all carried out under strict control, being fully coordinated according to the interests of ISIS, which is in fact the organization that controls terrorism in Mozambique and in most of Africa. With the recent attacks, Mozambique has reached the mark of more than 2,500 dead since the start of the attacks and clashes in 2017. In addition, the number of migrants is already over 70,000, due to collective fear.

However, the reasons why militias representing ISIS want to control the region are quite strategic. Palma is a city close to a large gas exploration field under the control of the French company Total. Right after the attack, Total suspended its activities indefinitely. As a result, the company's facilities are vulnerable to occupation by terrorists, considering that government forces have been unable to contain the attacks.

Indeed, the most plausible explanation for the focus of the attacks and tensions being Palma and the entire region close to the border with Tanzania, where there are rich reserves of natural gas, is that there is an interest on the part of ISIS to control this natural resource and enjoy its technological and economic benefits. Al Shabab has been conducting attacks with the objective of making it impossible to carry out the exploration and commercialization of the gas.

Total, which has now suspended its activities, can, at any time, give up on its projects in Mozambique if it does not receive support in security policies - something that the Mozambican government does not seem capable of doing and that the French government does not seem interested in. This will lead to the abandonment of the facilities, which could be occupied by Al Shabab in a few days, making official the control of Mozambican gas by terrorists affiliated with ISIS. This situation would be catastrophic, as it would put a large amount of material resources under the control of criminal organizations, making possible several projects that until then would have been unimaginable. After all, having an equipped army, controlling a territory and its population, and exploring and trading natural resources, terrorists will have almost all the necessary requirements to form a true country in Africa, which will serve as the basis for international terrorism.

The formation of an Islamic caliphate in Africa is not a recent project. This has always been part of the dreams of the largest terrorist groups, and many see that such a project would in fact have greater viability in the African continent than in the Middle East, mainly because it is a region with much weaker states, much more deteriorated political structures, poorly equipped armies, with little military action by world powers and with a gigantic list of natural resources far beyond oil. It is no coincidence that ISIS’ activities in Africa have been growing as this group has failed in Syria. The less space it loses in the Middle East, the more ISIS focuses on regions with less international attention.

Historically, France is the nation that is most concerned with the security of the African continent. There are several French military cooperation projects with African nations and the presence of the European country on this continent is immense. However, we can clearly see that the mechanisms used so far have not been sufficient and that Paris is no longer able to deal with the African issue. Still, amid problems with migration and concerns about the forthcoming elections, Macron does not seem willing to change his policy towards Africa. Meanwhile, Mozambique suffers from the advance of the terrorist militias, which already almost completely control Palma. Total is about to leave the country and soon its structures may be commanded by Al Shabab, which will be able to use natural gas to invest in the infrastructure of a new caliphate or to sell resources on the world illegal market. In the end, who will prevent the catastrophe of the formation of a terrorist state in Eastern Africa?
Source