American Encircling Strategy Forces Russia and China to Get Closer 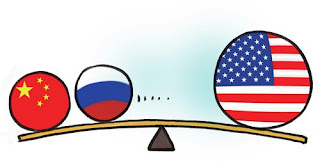 The United States does not seem willing to change its policy of encircling China. More and more Washington is showing interest in practicing an aggressive agenda against Beijing, with no opening for productive diplomatic dialogue. The main American bet to implement this plan is to harden the actions of QUAD in cooperation with NATO, however, what the American government does not seem to be considering in its strategic calculations is that this policy may have a terrible side effect for the US, since this will lead China more and more to seek an alignment with Russia as a way to neutralize the actions of the West and QUAD in the Eurasian space.

Last Friday, Chinese and American diplomats met in Alaska to establish dialogues about the future of bilateral relations. The outcome of such dialogues can be summed up in what happened after the end of the meeting: Antony Blinken traveled to Brussels to meet with NATO's top echelons and China began preparations to receive the visit of Russian Foreign Minister Sergey Lavrov. In parallel, American Defense Secretary Lloyd Austin met with his Indian counterpart Rajnath Singh on Saturday to talk about China - the meeting was secret, and its actual content is unknown.

In other words, the meetings in Alaska did not reach any agreement and both countries are following a path of increasing rivalry, each isolating itself in their respective antagonistic international alliances. In summary, during the meeting, American diplomats highlighted the concerns of the Biden government in relation to China, which were responded with an unfriendly Chinese call for Washington to stop interfering in China's internal affairs and to no longer try to take American form of democracy to all nations of the world. Without any point of mutual agreement, the meeting was a real diplomatic failure.

In fact, American policy towards China has been extremely authoritarian - and the same can be said about Russia. Two examples of how the US has been working with Russia and China are the recent escalation of diplomatic tensions between Washington and Moscow after Biden called Putin a "killer" and, in the same vein, repeated statements that China would be "the greatest geopolitical challenge of the 21st century", in addition to the accusations of "genocide" in the Chinese management of the Xinjiang Uygur Region. The lack of restraint in words by the new American government is an impressive point and highlights what that government really thinks about the nations it criticizes. Biden's international agenda is just the materialization of his diverse radical ideological assumptions. The Democrat seems willing to use any resources to guarantee the US absolute world leadership, completely overpowering any other nation. Biden does not act in the geopolitical scenario with caution or respect towards his opponents, but with aggressiveness and arrogance - which deeply irritates his opponents.

The Biden government's tactic to contain China has changed from a purely economic and commercial perspective - as was Trump's strategy - to a more militarized stance. Biden bets on QUAD as a way to achieve his main plans for China. Recently, on March 12, the American president and several officials from the new government participated in a virtual QUAD meeting where some strategies were developed. QUAD does not intend to act only in military and economic strategies, but also in several fronts of cooperation, such as medical diplomacy - having recently announced a billion-dollar aid plan for India in the production of vaccines. However, in any case, such strategies are drawn up by nations that directly rival China and, in the end, the realization of any of these plans tends to affect to some extent the regional Chinese interests - which are disputed by India, Japan and South Korea.

Bliken's almost simultaneous encounters with NATO leaders and Lloyd's with India (and consequently QUAD) authorities show the American bipartite strategy of trying to contain Russia and China with these two alliances, respectively. But at the same time, this can collaterally lead Moscow and Beijing to unite more and more, forming a much stronger coalition.

The Russian and Chinese governments have already agreed to renew the Treaty of Good-Neighborliness and Friendly Cooperation, a topic that is likely to be discussed during Lavrov's visit. Such a visit takes place at a time of particular need for rapprochement between both countries - something that has been going on for some time. Apparently, the American government is too focused on containing Russia through NATO's European action and is ignoring the Russian influence power in the Asian zone, which, if it works in partnership with China, can neutralize a large part of QUAD's actions. Russia is one of India's biggest partners in military trade, for example. Pre-agreed policy coordination between the Chinese and the Russians could undermine such cooperation and harm India, which depends on Russian equipment.

In addition, the evolution of the Russian-Chinese partnership to a military alliance would be relentless. If China and Russia implement a joint military exercise agenda, tensions across the Eurasian area will increase, but in return, QUAD will be completely neutralized in the face of its powerlessness to face such a coalition. In the same vein, Washington could do nothing, considering the impossibility of facing a Russian-Chinese coalition by any means.

Biden does not seem to be realizing that the more he forces a siege policy on Russia and China simultaneously, the more he will boost cooperation between these two countries and the search for a common cooperation agenda. And such an episode would represent the end of any American project with global dimensions, considering that it would unite the two biggest powers in Eurasia on one axis - and no other power or military alliance in the world today could contain such a coalition.
Source