Hate crimes against Asians on the rise in US 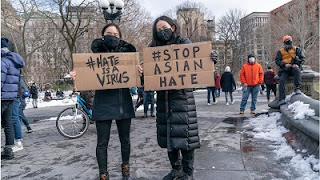 Racial tensions have always been a structural problem in American society. Contrary to what many people think, however, such tensions do not limit to a confrontation between "blacks and whites" but encompass disputes of interests between all the peoples that cohabit in the American territory. Euro-Americans, African Americans, Latinos, Chinese Americans, Japanese Americans, Arabs, among others, have ethnic and social disputes in the middle of their relations. When we talk about the American population of Asian origin or Asians living on American soil, it is inevitable to report the issue of racism and the terrible conditions of ethnic hate to which these peoples are subjected, however, this topic has been constantly omitted by the Western media - omission that clearly has political goals.

A few days ago, Robert Aaron Long, a 21-year-old American, was the protagonist of a shooting in Atlanta, Georgia. Long murdered eight people, six of them of Asian origin. The case generated worldwide commotion and racial motivation which is difficult to hide, but several media outlets portray the case as an episode of "sexism", "feminicide" and gender hate - due to the fact that the victims were mostly women, camouflaging the evidently racist nature of the attack. More than that: the Atlanta police itself did not charge him with a racial hate crime, only classifying it as "malice murder" and aggravated assault.

However, the Atlanta sniper is far from being an isolated case. Racial hate against Asians is a growing phenomenon in the US and across the West. Between March 2020 and February 2021, there were 3,795 incident reports oscillating from racist comments to violent attacks against Asians in the US. According to data from California State University, last year, hate crimes against Asians in 16 of the largest American cities increased by 150% over the previous year. Especially with the pandemic of the new coronavirus, the cases grew even more because a discourse of responsibility for China for the spread of the disease was created. It is important to emphasize that this speech does not emerge popularly, but institutionally, coming from high-level propaganda from the Trump administration, which officially adopted the rhetoric of blaming China for the virus.

Among the big cities, New York was the one that registered the biggest escalation of episodes of anti-Asian racism. In 2020, there were 28 reported incidents. In 2019, only 3, according to data from the city police department, which shows the overwhelming growth due to the pandemic. Last month alone, several attacks on Asian victims were reported to the police, including violence against an elderly woman who was pushed out of a bakery in Queens. But, as in the case of Atlanta, none of these incidents were registered as a hate crime. In fact, the only person prosecuted for hate crime against Asians in New York this year was a Taiwanese man, accused of graffiti messages against China - it seems ironic, but it is not by chance that the only person accused of racism against Asians was precisely an Asian: the American police itself adopts a racist stance, protecting Americans and accusing only Asians.

In fact, it is not safe to be Asian and live in the US. And Biden, whose main electoral rhetoric was precisely anti-racism, seems unconcerned about this. The anti-Chinese stance has not changed from one president to another. The Democrat has shown no interest in denying the anti-China rhetoric adopted by the American state before his election and this certainly has an impact on the popular mentality. The people not only start to consume the anti-Chinese hatred spread in the media propaganda, but they also generalize their disgust towards all peoples of Asian origin, attacking Japanese, Koreans, Thai, Vietnamese, among others.

Sadly, we see history repeating itself. In the past, the American government has endorsed an anti-Japanese racist stance to create a popular mentality of hate against Japan in a context of geopolitical rivalry. Thousands of Japanese Americans were imprisoned in concentration camps during World War II simply because they were Japanese descendants - meanwhile, the country of their ancestors was being bombed with nuclear weapons by a pure demonstration of strength on the part of Washington.

The same racial hatred institutionally propagated for political purposes was repeated later in the Korean and Vietnam Wars. And now we see the same thing happening with China in a context of trade war. Washington changes its targets from country to country but maintains a history of racial hate against Asians – and that does not look like to end anytime soon.

Since Atlanta was not the first case and considering that it probably will not be the last one, who will protect the millions of Asian descendants living in the US? And when will Washington be accused of colluding with hate crimes in the international courts?
Source