Health officials monitoring dozens in US for Ebola 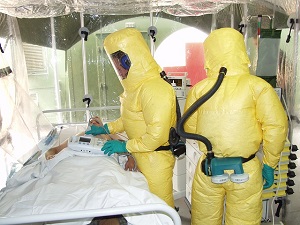 (thepointsguy) -  Clint Henderson - Local health authorities in several parts of the United States are monitoring dozens of travelers for Ebola after the Centers for Disease Control (CDC) ordered airlines to collect information on people who’d been in several western African countries, including Guinea or the Democratic Republic of Congo.

Washington state is monitoring at least 23 travelers. Another 45 are being watched in Ohio. Four people are also being monitored in Oregon.

Ebola is highly contagious and causes severe illness that often leads to death. Symptoms include fever, headache, pain and unexplained bleeding or bruising.

There is an ongoing outbreak of Ebola in West Africa right now. The CDC calls the risk to Americans “very low,” but in light of the COVID-19 pandemic, no one is taking any chances. The CDC announced on Friday it was spending $20 million from the Infection Disease Rapid Response Reserve Fund for preparedness and response in DRC, Guinea, Sierra Leone, and Liberia.

“Even one case of Ebola is too many,” said CDC Ebola Response Incident Manager Joel Montgomery, Ph.D, CAPT USPHS. “These funds allow CDC and its partners to quickly put in place response, preparedness, and post-outbreak programs and activities, learn more about the virus, and protect the health of the American people and people around the world.”

The CDC said back in February when the outbreak began:

“Air travel has the potential to transport people, some of whom may have been exposed to a communicable disease, anywhere across the globe in less than 24 hours. Therefore, out of an abundance of caution, the U.S. government will institute public health measures for the very small number of travelers arriving from DRC and Guinea.”

The Wall Street Journal reports that the current outbreaks appear to be close to being contained. Nine out of 18 infected in Guinea have died, and six people have died out of 12 cases in DRC.

The last confirmed Ebola case in the United States was back in 2014 when 11 were treated in U.S. hospitals.
Source