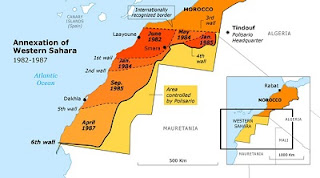 Human rights activist Maati Monjib (a French-Moroccan dissident) has left prison on provisional release on last Tuesday. He was sentenced to one year imprisonment on money laundering charges and was arrested on January. Monjib allegedly had been on hunger strike for 20 days and claims to be the target of Moroccan political and judicial harassment due to his political activities. Amnesty International has described him as a “prisoner of conscience”. Having lived in the US for a number of years, he enjoys a certain degree of support among sectors within American civil society and NGOs. As Monjib remains under a kind of house arrest, his case is a diplomatic problem for Morocco – and for the United States themselves.

There has been some internal and external pressure on US President Joe Biden to overturn former president Trump decision regarding the US recognition of Morocco's claim over Western Sahara. Spain and Algeria particularly have been pressuring from the external side. Such recognition came after the authorities in the Moroccan capital Rabat normalized their relations with Israel, in a kind of “quid pro quo” move. However, it has placed Trump's successor in a quite difficult situation.

To sum it up, Biden could either create tensions with both Morocco and Israel, two important allies (in case he does walk back) or, by not doing so, he could unwillingly motivate Rabat to pursue full war against the Polisario Front, the rebel group which demands independence for Western Sahara. In this case, tensions with Algeria could escalate and a kind of Algerian-Moroccan proxy war could follow – there is already a proxy war going on in neighboring Libya (between Egypt and Turkey) and this situation has impacted Algerian internal security and in fact it threatens the whole continent for it could escalate into a kind of full-on intracontinental war, according to Candace Rondeaux, a “Future War” (Arizona State University) senior fellow.And the further escalation of the Western Sahara conflict – which has already been heating up – would certainly generate instability in that strategic region. A potential humanitarian crisis which could flood Europe with refugees, raising also European concerns about migration and terrorism in a situation of war.

In such context, the recent arrest of journalist Maati Monjib - who might become a cause célèbre - could be a test for Biden human-rights focused foreign policy, which has been exemplified by the recent restrictions placed on Saudi Arabia after jailing dissidents - Biden even reviewed a Trump's decision by suspending arm sales to Saudi Arabia.

What course of action will Biden pursue regarding Morocco? So far, there is no indication the US is willing to “abandon” Radat. One interesting sign was sent by US Department of State Spokesperson Ned Price in his February 22 speech, when he referred to the Moroccan conflict as “the dispute in Morocco”, which implicitly states that Western Sahara is, from an American perspective, part of Morocco. However, the pressure will remain.

According to political analyst Samir Bennis, Morocco should secure contracts with carefully selected public relations firms and offer donations to finance studies within US think tanks so as to keep advancing its position in Washington. It will be no easy task.

The issue of human rights and individual freedom has a high importance in Biden's agenda or at least those are the narratives the current US administration has been pushing very hard in the age of information warfare. For example, last Monday, the Biden administration sanctioned two Chinese officials, citing human rights abuses against the Uyghurs, a Muslim population in Northwest China. In fact, this is in line with some moves of the previous administration. For example, in June 2019 Trump signed a bill calling for sanctions against China over the same issue. At the final days of his administration, Trump also signed into law the Tibet Act, which supports Tibet over China in a number of areas. It had bipartisan support

One of Biden's first actions, few weeks after taking the oath, was to order surprise airstrikes in Syria (near the border with Iraq), without Congressional approval. Multiple facilities were destroyed. The bad press was huge and so earlier this month, he canceled a second airstrike so as to “avoid killing civilians”, according to officials. The target of such strikes were pro-Iranian militias and the intention was clearly to send a sign to Iran.

Iran is a close strategic ally to Syria and has provided it with constant aid and support during the Syrian conflict. Lebanese Hezbollah combatants (backed by Iran) have been one of the major forces containing the advance of the so-called Daesh Islamic State (ISIS) terrorist group and Moscow too has also supported the Syrian efforts to defend itself. From a Russian perspective, the current Syrian government plays a key role in maintaining stability in the region and even ensuring the safety of minority populations there (Christians, especially). Christians as well as the Yazidi and other minority populations have been targeted by ISIS and other radical Islamic groups which have been funded and armed by the US for years.

Biden's America sees the situation quite differently and tries to project it accordingly. So, the current political and diplomatic crisis in Morocco will also involve complex information campaigns because we live in the age of information warfare and social networks. The human rights narrative will have to be adjusted and re-pushed regarding Morocco as well as is the case in many other scenarios Biden will have to face – be it in Eastern Europe, Africa, in Latin America or in the Middle East.
Source