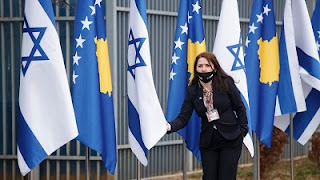 Kosovo can expect retaliation from Turkey for opening its embassy in Jerusalem on May 14. Kosovo’s authorities in Pristina made a huge risk considering Turkey offers significant support in forming the so-called Kosovo Army. If Turkey chooses to react against Kosovo, it could also see Pristina fall out of favor with Turkish-aligned Muslim-majority countries like Qatar, Azerbaijan and Pakistan.

It is unlikely that any country aligned with Turkey will withdraw their recognition of Kosovo, but Pristina still risks a lot. What is certain is that there will undoubtedly be a change in the bilateral relations between Pristina and Ankara as the latter now realizes that Kosovo pursues a path of self-interest rather than Turkish vassalage.

In reaction to the embassy opening, the Turkish Foreign Ministry said: “By acting in such a manner, Kosovar leaders have violated relevant UN resolutions regarding Jerusalem’s status, as well as the status quo under the scope of the peace process and have damaged the vision of a two-state solution and hopes for peace in the region.” The ministry also urged Kosovo to use common sense and renounce its “irresponsible and lawless step.”

Although UN resolutions on Jerusalem were evoked, Turkey itself violates numerous UN resolutions by defying Security Council Resolution 1244 on the status of Kosovo, as well as several resolutions regarding its occupation of northern Cyprus and the opening of Varosha beach in Famagusta, among others.

Kosovo’s independence is recognized by 98 out of 193 (51%) United Nations member states and was awarded because of Pristina’s willingness to enact U.S. interests in the Balkans against Russia by weakening Serbia. Kosovo’s de facto independence is purely thanks to U.S. actions and not because of Turkish support. By Kosovo not only establishing relations with the Jewish State, but also deciding to open its embassy in Jerusalem instead of Tel Aviv, Pristina is advancing U.S. interests in having Jerusalem internationally recognized as Israel’s capital.

Although Turkey was the first Muslim-majority state to recognize Israel and has a burgeoning multibillion dollar trade exchange with its supposed enemy, Ankara is picking up the mantle of the Palestinian Cause as Arab states are long disinterested in it and are beginning to normalize relations with Tel Aviv. By ardently supporting the Palestinian Cause, at least rhetorically and not with any real material support, Turkey is attempting to fill the void created by Arab disinterest to gain more influence and prestige in the Islamic World.

However, Turkey mistakenly believed that Pristina would automatically align with Turkish foreign policy due to their historical connection during the Ottoman Empire. Turkish President Recep Tayyip Erdoğan adopts a syncretic ideology of neo-Ottomanism and pan-Turkism that envisages Turkey as a major pole of power that stretches its influence from the Balkans and North Africa to the Turkic heartland of Central Asia. What Erdoğan failed to realize is that the Albanians, who were once crucial to Ottoman control over the Balkans, are today overwhelmingly nationalist and not Pan-Islamist. Whereas once Ottoman authorities could count on Albanian servitude as they were co-religionists, the dominating ideology of Albanians today is nationalism. As Kosovo’s existence as an Albanian-dominated independent state hinges on U.S. support and not Turkish, it is unsurprising that Pristina did not hesitate to open its embassy in Jerusalem instead of Tel Aviv, knowing full well that this would elicit a reaction from Ankara.

Turkey has been providing strong support for Pristina in preparing the so-called Kosovo Army. Ankara not only provides arms but has even stored heavy weapons and mechanized armored vehicles in army warehouses in Albania intended for the so-called Kosovo Army. Turkey is also training a part of the future officer corp. Whereas the U.S. gives Kosovo diplomatic and international legitimacy, Turkey is muscling in with the hope that it will create a military force in the middle of the Balkans that is loyal to Turkey, just as it has achieved in the Caucasus with Azerbaijan, in the Persian Gulf with Qatar, and in the Horn of Africa with Somalia.

Any Turkish suspension of military aid would be a striking move against Pristina. It would be especially devastating as Serbia and Turkey signed defense cooperation agreements last year. Belgrade, even in the midst of the Turkish-sponsored invasion of Nagorno-Karabakh, announced its intentions to purchase Turkish-assembled Bayraktar drones.

The European Union also reacted to the opening of Kosovo’s embassy in Jerusalem because it is not in line with their Israel-Palestine policy. Pristina will be exposed to American pressure to keep the embassy in Jerusalem as it is part of the Washington Agreement, but on the other hand will also have pressure from the European Union and Turkey to withdraw the decision. As already emphasised though, it is unlikely that Kosovo will go against Washington’s consensus as its existence as an independent state is only because of American support, and not that of the European Union or Turkey.

The question begs whether Turkey will continue to support the so-called Kosovo Army or retaliate in another way. Although it is unlikely that Turkey will abandon Kosovo for opening an embassy in Jerusalem as it can expose Turkish contradictions for their own UN resolution violations, multibillion dollar trade with Israel, and being the first Muslim-majority country to recognise the Jewish State, undoubtedly relations will be affected as Pristina will remain an American vassal rather than a Turkish one.
Source
Think your friends would be interested? Share this story!