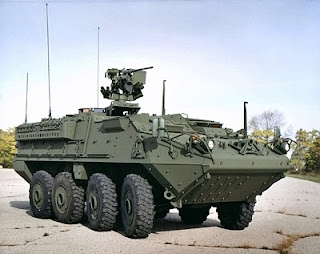 By buying 54 armored vehicles for its military from the U.S., North Macedonia is paying a heavy price for joining NATO because member states have an expectation, if not an obligation, to buy American-made weapons whether they need them or not. North Macedonia has no need to spend $210 million on armaments, especially as it does not have the money to spare when we consider it has much more immediate concerns, such as permeating issues of poverty, unemployment, and national unity. Although the purchase of 54 armored vehicles is partly in reaction to the rearmament programs of neighboring countries, these programs are not aimed against North Macedonia nor will they lead to a conflict.

The Balkans is rearming, and as can be seen, North Macedonia does not want to be left out either. However, a mere $210 million will lead nowhere significant, especially if we consider neighboring Greece is spending over €10 billion on its Air Force and Navy, while Bulgaria, Serbia and Albania are also going through significant military upgrades.

Serbia, Greece and Bulgaria do not have direct territorial claims against North Macedonia, and in fact Greece, under a NATO mandate, controls the skies of the Balkan country. Although the majority of Albanians have territorial aspirations against western North Macedonia, Albania has been a NATO member since 2009. It is unlikely that NATO will allow an Albania-North Macedonia War, especially as the alliance has prevented Greece and Turkey from going to war on numerous occasions since they both became member states in 1952.

The only reason an Albania-North Macedonia War may be tolerated is if it serves U.S. interests. If Washington deems such a conflict necessary, there is little that $210 million worth of armored vehicles will be able to do to protect North Macedonia’s territorial integrity. Skopje however has become a loyal ally of Washington, and for now is not under threat of being Balkanized or absorbed into a Greater Albania. This arrangement will continue so long as Skopje continues serving U.S. interests and does not pivot towards Russia. A Balkanization or the emergence of a Greater Albania in North Macedonia will only be supported if Skopje turns away from Washington.

NATO membership, as North Macedonia would have been aware of when it joined the Alliance last March, opens new financial obligations. This is despite poverty in the country being enormous. The fact that the U.S. will allegedly give a part of the money is nothing compared to what will be paid by the North Macedonian state and taxpayers.

North Macedonia has so far spent about €100 million on defense, but according to NATO obligations, that figure must be increased to 2% of the GDP, meaning that Skopje should allocate a lot more per year on its defense. Although it will not correspond to the interests of North Macedonian citizens, it is a policy that Skopje will undoubtedly follow.

The Ministry of Defense of North Macedonia states that these are Infantry Carrier Vehicle Stryker’s and that the participation of the U.S. in the purchase of these vehicles will amount to 20 to 25% of the total amount. Delivery will begin in 2022.

Stryker is manufactured by American company General Dynamics Land Systems and is used by the American military. Stryker was created in the early 2000s and is intended for transporting motorized infantry units on the battlefield. It has the ability to fire directly from vehicles, provide infantry fire support, and offer comprehensive support for combat operations of mechanized military units.

Despite being American made and used, there have been a lot of negative reactions to the Stryker vehicle. The U.S. military used Stryker’s during its war against Iraq and compiled a special report on the efficiency of these vehicles. According to military experts, this vehicle is so incompatible with the tasks assigned to it that further modifications for troop use is unlikely. According to the soldiers who used Stryker’s in Iraq, it turned out to be very unreliable, poorly protected from anti-tank shells and small arms, and has low firepower. This is in addition to having significant structural shortcomings. Among the few advantages are the smoothness of driving, comfort on uneven terrain, and the fact that it has wheels instead of tank treads.

In 2019, before the COVID-19 pandemic, poverty in North Macedonia was at 17%. It is estimated to have risen to 20-25% of the population because of the pandemic. In 2020, the unemployment rate in North Macedonia was approximately 16.44%. There is also a lack of welfare services and an ethnic crisis between self-identifying Slavic North Macedonians and Albanians. Considering the North Macedonian GDP amounted to only $12.5 billion in 2020, allocating $210 million towards badly reviewed Stryker armored vehicles suggests that Skopje is prioritizing its NATO obligations despite no current credible external threats against it. This money could instead be used towards poverty and unemployment reduction.