UK refuses to pay its 40-year debt to Iran 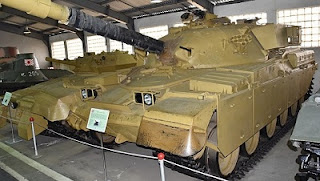 Relations between the UK and Iran are becoming more tense day after day. In addition to the controversial discussions surrounding the nuclear issue, the focus of disagreement between the two countries is now the existence of a British debt of more than 40 years. The UK default has been "remembered" by Iranian officials, but the British continue to ignore the case.

Between 1974 and 1976, the then Iranian monarchist government signed contracts for the purchase of 1,500 Chieftain tanks and 250 armored vehicles. The UK, however, never delivered the products. Since 1979, the new regime has demanded reimbursement, which, likewise, has never been accomplished. Adding the original amount to the accumulated interest, the debt reached 450 million pounds.

Commenting on the debt issue, the Iranian Brigadier-General Amir Hatami said: "There has always been a distance between the stands taken by British officials and their practical resolve. (...) The restrictions arising from arbitrary sanctions are not the main reason for the non-payment of the UK debt to Iran. (...) The Iranian nation wants the British government to settle the issue through mechanisms previously discussed by both sides."

The main reason why the British government currently refuses to pay the debt is the interest. In early 2019, a British court rejected a claim by the Persian country asking for 20 million pounds in interest due to the accumulated debt time. The Iranian rhetoric is based on similar contracts signed between the two countries in 1971, where this interest margin was foreseen. The UK repeatedly refuses to recognize such interest and, most likely, if there was a British payment in the short or medium term, this would be done excluding the interest demanded by Iran, which means that, in practice, demand will continue and that there are no good expectations for the appeasement of bilateral relations in the near future.

However, responding to the latest Iranian pronouncements, the British government, pressured by the international media, issued some timid statements about its debt. The Secretary of State for Defense Ben Wallace said that “London is looking for a legal way to pay off this debt”.

The debt, despite having always been demanded by Iran, was no longer the subject of great attention for a long time. The reason for the return to the attention is due to the fact that Iran constantly receives several criticisms from the UK - at the same time that the British refuse to pay off its obligation. Indeed, in order for British criticism - both on the nuclear issue and on any other topic - to be received constructively and a dialogue to be established, the UK must at least give an adequate response to the debt and begin to create payment strategies. If the British stance towards Iran were more lenient, certainly Tehran would not be focusing the debt topic so rigorously, but, considering that London remains unchanged in its condemnation stance, expectations point to a progressively more tense dialogue.

In the same way, the British government recently launched a new defense plan announcing new military policies, which are expected to expand its nuclear arsenal from 180 warheads to 260, a growth of about 45%, ending the progressive disarmament implemented 30 years ago. The justifications for such an extreme policy were, as expected, the "threats" posed by Russia and China.

Iran responded to the UK with harsh criticism, saying it was hypocritical for the British government to condemn the Iranian nuclear program, which has no nuclear weapon and does not even intend to develop one, while announcing an increase of almost half in its own arsenal. Commenting on the case on his social network, Iran's foreign minister, Mohammad Javad Zarif, said: “In utter hypocrisy, Boris Johnson is “concerned about Iran developing a viable nuclear weapon”. On the very same day he announces his country will increase its stockpile of nukes. Unlike the UK and allies, Iran believes nukes and all WMDs are barbaric & must be eradicated.”

Iran's criticism of British military policy is correct. In a world more and more concerned with maintaining peace and with the need to avoid new armed conflicts, increasing its nuclear arsenal by almost half should not be the posture of a power with enormous diplomatic influence like the UK. Furthermore, it is Tehran's right to claim payment of the debt. And although London may contest the interest amount in some way, the debt needs to be paid off. Geopolitical rivalry and divergent interests should not influence the obligation to fulfill a commercial contract. As long as the debt lasts and as long as it intends to boost its own nuclear potential, the UK will have to at least ease its stance on Iran.
Source