UK's fight to stymie Scottish independence will only get dirtier 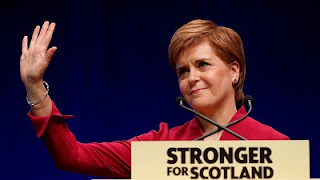 Johanna Ross is a journalist based in Edinburgh, Scotland.

The gloves are off when it comes to the fight for Scottish independence. Supporters of leaving the Union always knew things were going to get really dirty if independence support swelled. The Westminster government may have been somewhat preoccupied with Brexit in the last few years but now it’s clear it has finally woken up to realise that the United Kingdom is close to falling apart and it is frantically doing what it can to stop this from happening.

Firstly we have had the UK security services’ likely hand in the Alex Salmond affair, which I, amongst others, have written about previously. What was a concerted media campaign against the former First Minister a couple of years ago has now transformed, incredibly, into a massive assault on Nicola Sturgeon, for having ostensibly misled parliament about her knowledge of the Salmond case. Not that Sturgeon has a lot to think about, or that a pandemic’s been raging or anything like that (!) - clearly whether she knew about allegations against Salmond before November 2017 or not, takes precedence over everything else.

Unfortunately for the SNP, the campaign against Sturgeon is going rather well for the Unionists. She has now been found ‘guilty’ (as it’s being reported in the mainstream media) by a Scottish parliamentary committee of misleading parliament and so it is said she has ‘potentially’ broken the ministerial code. Their conclusions were as follows:

So at best we have ‘finds it hard to believe’ - this once again emphasises the lack of evidence against any wrongdoing by the First Minister. But moreover, given the fact that Alex Salmond was her close friend and mentor of 20 years or more, isn’t it understandable that she may have wanted to keep any meeting with him on the matter completely private? It was such a sensitive matter that it seems quite appropriate that she shouldn’t have wanted to share it with anyone else; the more people who knew the greater the likelihood of information being leaked to the press.

And there have been an extraordinary number of leaks to the media throughout this case, including the committee’s ruling which was given to Sky News last night before its official publication due next week. As Sturgeon points out, such ‘partisan leaks’ confirm the political bias in the case against her. In response to the committee’s findings last night she said:

“What's been clear is that opposition members of this committee made their minds up about me before I muttered a single word of evidence; their public comments have made that clear. So this leak from the committee - very partisan leak - tonight before they've finalized the report is not that surprising.”

Such political bias against Sturgeon from the Unionist members of the committee is of course a problem. It has been said that they wanted to add that Sturgeon ‘knowingly’ misled parliament, but that the Scottish Nationalist members of the group prevented them from doing so. This is fortunate for Sturgeon, as if it had been found she had deliberately obfuscated MPs, she would have been guilty of breaking the ministerial code. We now await the verdict of a separate enquiry, being carried out by House of Lords peer James Hamilton QC, whose conclusion will carry more weight than the parliamentary committee’s, and will likely determine Sturgeon’s fate.

It is of course, an extraordinary, and lamentable, twist of fate, that the very man who devoted his life to independence, Alex Salmond, could be responsible for the campaign’s undoing, by pursuing Sturgeon in this way. But that is for Alex Salmond to ponder on; history will be his judge.

Aside from exploiting the Salmond/Sturgeon affair, there have been other indications that the Westminster government is doing all it can to prevent Scottish independence. It was announced earlier this week that both the cabinet office and the Foreign, Commonwealth and Development Office are to be moving to Scotland. That’s 1000 jobs to be relocated north of the border, in what Cabinet Office minister Michael Gove said was a bid to ‘co-locate the engine room of the UK Government in Scotland’.

This is nothing more than a desperate, last minute attempt by London to lay claim what is fast becoming a break-away territory. It reminds one of the dying days of the British Empire. Back then the UK government took the same approach, appointing a governor with a team of civil servants in its colonies to ensure the territory was run as Westminster decreed. Now Scotland is that colony which must be prevented from detaching itself from the UK at all costs. And make no mistake, Glasgow has been chosen for a reason - it’s considered the ‘capital’ of the pro-independence movement.

But I fear it’s too little too late from Johnson’s government. Preoccupied with Brexit for the last few years, they have taken too long to react to growing discontent with Westminster rule. This simmering dissatisfaction has manifested itself in polls over the last year or so which have shown a gradual increase in support for Scottish independence, far beyond the 45% that voted for it in the 2014 referendum. The independence movement is going from strength to strength; it must stay united if it is to maintain momentum in the near future when we will likely see more dirty tricks, disinformation and scheming from the British establishment and security apparatus.