Uneasy Russian-Turkish relations are at risk of deteriorating 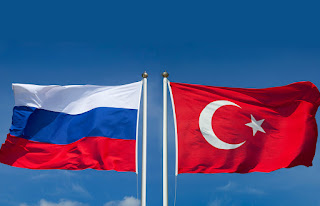 Uriel Araujo, researcher with a focus on international and ethnic conflicts

Both Russia and Turkey have celebrated on March 16 the centennial of the Friendship and Fraternity Treaty of Moscow, and have exchanged diplomatic pleasantries. Mustafa Sentop, speaker of the Turkish Parliament stated that Russia is “not only our neighbor, but also our friend and cooperation partner”. The official representative of the Russian Ministry of Foreign Affairs, Maria Zakharova, stated that the two countries’ relations are based “on the principle of good-neighborliness and added that Russia is ready to further cooperate with Turkey in all areas, including investment cooperation and infrastructure and energy.

Turkey launched the construction of its third Russia-funded nuclear reactor at Akkuyu nuclear power plant. The funds are being provided by Russian investors. The nuclear power point is expected to cost around $20 billions, 93% of which come from Rosatom, the Russian State Atomic Energy Corporation, and the construction is being carried out by a Turkish-Russian joint venture.

But not everything is well regarding Russian-Turkish relations. In fact, such relations have always been complex.

A few years ago, when a Turkish fighter jet shot down the Russian Sukhoi Su-24 above the Turkish-Syrian border in November 2015 and a crisis ensued, some Russian politicians even proposed annulling the Treaty of Moscow. The Russian Foreign Ministry actually considered taking such action so as to send a powerful political message to Turkish President Recep Tayyip Erdoğan, but, in the end, Moscow dropped the idea in an effort to de-escalate tensions with its neighbor. Nowadays, Moscow and Ankara are not close allies, but they remain important partners.

The relations between the antecedent states of modern Russia and Turkey were conflictual: the so-called Russo-Turkish wars between the Russian and Ottoman empires are among the longest wars in History. One could say in fact relations between the two countries remained bitter up until the First World War. The 1921 Treaty of Moscow was an agreement between the Russia, led by Vladimir Lenin, and the revolutionary National Assembly of Turkey, led by Mustafa Kemal Atatürk, at a time when the government of Mehmed VI (last Sultan of the Ottoman Empire) was still recognized by most of the international community. The Moscow Treaty finally established friendly relations between the two countries and, by signing it, Russia recognized the then Turkish borders (as well as those of Armenia, Azerbaijan and Georgia) – later confirmed by the Treaty of Kars of October 1921.

Such borders are still in existence and that remains a point of contention between Turkey and Armenia to this very day. Turkey supported Azerbaijan, its close ally, against the Armenians during the so-called First Nagorno-Karabakh War, between 1988 and 1994, and has done so again in the recent 2020 Nagorno-Karabakh war, an event which may have profoundly altered Russian-Turkish bilateral relations.Such was a Turkish move to both extend its sphere of influence and to marginalize Russian influence in the region.

In October 2020, Russia targeted with airstrikes a training camp for the Failaq al-Sham, an alliance of Sunni Islamist rebels that was backed by Turkey. This was clearly a kind of warning Moscow sent to the Turkish authorities in Ankara. Russian President Vladimir Putin was a party to the ceasefire agreement signed between Azerbaijan and Armenia. After Armenian forces left the Azerbaijani territories (as part of the peace deal), Russian and Turkey signed an agreement establishing a joint observation center in the Nagorno-Karabakh region. Currently there are about 2,000 Russian soldiers in the Lachin corridor between Nagorno-Karabakh and Armenia who are being deployed as peacekeeping forces.

Today there are joint Russian-Turkish operations in Nagorno-Karabakh as well as in Syria. However, Turkish support for recent Ukrainian moves towards the Donbass region is a major issue and so is Turkey’s NATO membership, as Russian Defense Minister Sergey Shoygu stated last Wednesday (claiming it is an impediment to cooperation). While the minister said that the current Russian-Turkish joint operations are "fruitful" (both Russia and Turkey patrol the northeast of Syria, fighting together against the terrorism) and common ground is possible, he also noted that the work is difficult precisely because of the issue of NATO membership.

There seems to be also a deep geopolitical and geostrategic issue: the interests of Russians and Turks tend to clash in the Caucasus and Central Asia – and their rivalry in the Middle East is notorious. A proxy competition between Russia and Turkey is one recurring pattern that can be seen behind the current conflict in Libya, for example. On the other hand, an alliance with Turkey, from a Russian perspective, would further undermine NATO, which to a certain extent only exists today to antagonize Russia (and China). As for Turkey, its ambitions of joining the European Union do not seem to have any significant chance of success.

Bilateral relations between Moscow and Ankara have shown its ability to overcome their regional competitions, but tensions are escalating. The way things develop in Donbass might become a new test for such ability.
Source: InfoBrics
Think your friends would be interested? Share this story!