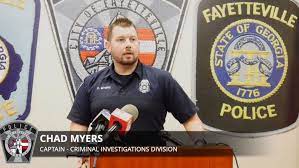 (The Citizen) - If 21 people in more than a dozen locations in several states had been able to check each other’s social calendar this past week, they would have been shocked to find so many people in the same lines of work were scheduling meetings at two Fayette County hotels on two nights in a row.
Wherever they started out, they all ended up in the Fayette County Jail, charged with a variety of crimes including prostitution, pimping, illegal drug possession and identity fraud, according to both police departments’ spokesmen.

In the largest sex sting operation in memory in Fayette County, Peachtree City and Fayetteville police coordinated setting up appointments for successive nights with both men and women who had advertised their sexual services in social media.

On Wednesday night, 12 of them showed up at a hotel in Peachtree City, and on Thursday night nine checked into a Fayetteville hotel. Undercover officers posing as potential clients met the ones selling their services inside a room in each hotel.


The meets were scheduled so there was enough time to establish that a crime had been committed in each case and to arrest and transport the accused to the Fayette County Jail.

On Wednesday night, the following were arrested in the Peachtree City sting:

• Javaris N. Middlebrooks, 20, Atlanta, charged with prostitution, criminal use of an item with an altered ID mark, and possession of less than 1 ounce of marijuana.

• Dorian Partridge, 27, Stone Mountain, Ga., charged with prostitution, possession of methamphetamine, and possession of less than 1 ounce of marijuana.

• Micaela D. Wood, 22, Edgewood, Texas, charged with prostitution, possession of methamphetamine, and possession of less than 1 ounce of marijuana.

• Jayson Guyton, 24, Atlanta, was charged with prostitution and possession of less than 1 ounce of marijuana.

• Michael Smith, 26, Atlanta, was charged with prostitution and possession of less than 1 ounce of marijuana.

On Thursday night — prior to the tornado warning for Fayette — the following were arrested in Fayetteville:

• Lawrence Youch, 44, male, Charleston, S.C., charged with pimping. (He was with Hamey at the hotel.)

Here’s the news release from the Peachtree City Police Department:

“The mission of the operation was to identify victims of human trafficking and those caught in the cycle of forced prostitution, as well as deter continued operation of these criminal enterprises.

“The operation resulted in a total of 12 different people arrested [in Peachtree City] on various charges stemming from each encounter. At the conclusion of the operation, the following people were arrested and transported to the Fayette County Jail for the listed charges.

The Fayetteville Police Department conducted its own sting the following night, until interrupted by the tornado emergency, according to Criminal Investigation Division’s Chad Myers.

“It was a joint effort between agencies that had different types of technology and stuff for us to be able to jump out and use,” Myers said. “As a small agency, we don’t have this high dollar equipment to set up a room with surveillance equipment, video feeds and stuff like that. The [other agencies] were instrumental in providing support for that.”

At first glance, so many prostitution and pimping arrests at two hotels in the two cities might raise some eyebrows. Not to worry, said Myers.

“It had nothing to do with the hotel itself. … It’s the way our operation was running. We were posing as the person calling the prostitutes in. So no matter which hotel we picked, that would have been the hotel of the night. It wasn’t that that particular hotel has a problem with it per se. You know, it’s just where we set up and that’s where we were calling [the suspects] to. It wasn’t like they set up shop in there,” Myers said.

If you believe you may have information about a human trafficking situation:

Text the National Human Trafficking Hotline at 233733. Message and data rates may apply.